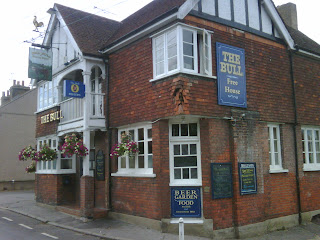 Here’s a couple of dates for your beer diary, both of them at The Bull, my favourite pub in the universe (check out their facebook page).

Firstly, a few questions: Do you like BrewDog beers? Do you want to drink cask BrewDog beers? Do you like BBQs? If you answered ‘yes’ to all of the above then read on… The Bull is hosting a BrewDog BBQ this weekend (BrewDog beer + BBQ = win!), the 14th and 15th of August. On tap will be: Trashy Blonde, 77 Lager, Zeitgeist, 5am Saint and Punk IPA. I’m particularly excited about 5am Saint as it’ll probably my only chance to try this new brew on cask. Plus I want cask Punk as that stuff rocks.

Secondly, to celebrate becoming West Kent Pub of the Year (they are up against The Butcher's Arms for Kent Pub of the Year), Garrett and Lynne are hosting a special evening where, and I quote, ‘No expense will be spared in ensuring that the ale range will be one of the best in the UK for that night... no - make that THE WORLD!’ This is a big claim but I don’t doubt that the line-up with be anything less than totally awesome (I’ve tried to get some clues out of them but they won’t tell… If I get them to talk then I get it up on here!). This year I've drunk some amazing beer in The Bull (just see the links here and add on Thornbridge's Epic Halcyon) so this promises to be something special. It’s on Thursday 20th August and the pub is a 30 minute train from London and then a nice 10 minute walk through the lush Kent countryside.

See you there!
Posted by Mark Dredge