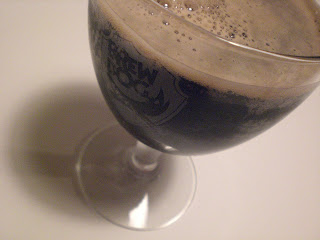 UPDATE: I wrote this ages ago but then Tokyo* exploded and I wrote about that instead. I haven’t edited anything of the original post because that’s how this thing works. It’s a little dated (RE: the GBBF quandary) but it still works. And here is the BrewDog post about the beer.

21.09pm. I’m into the newest of the Paradox range and it pours out a big bowl of opaque black with a head the colour of a sunburnt bottom.

21.11pm. It smells like milk chocolate, like kindling smoke, like old and dry wood, it’s earthy and it’s bold. And there it is: raspberries. Not a tart in-your-face kind of smell, more of a raspberry milkshake kind of thing.

21.13pm. Ok, wow. So I had to take a few sips back there and really roll around in it. This beer is seriously something. It has Smokehead’s earthy-smokiness but layered thickly above this are raspberries. They are fruity and fresh, sharp and sweet and the balancing act between barrel and berries is knife-edge stuff.

21.15pm. There’s something really opposing about the sweetness of the aroma and the sharpness of the taste. It draws you back in again and again. It’s an intense and new flavour experiences for me, mixing all the tastes in one sip with a crazy interplay and melding of complexity which threatens to fall over into complicated.

21.18pm. Sitting back and chilling, thinking about the beer, trying to get words to describe it.

21.21pm. I think I was unduly harsh last week (EDIT: it’s more like last month now…) about the British beers at the GBBF. Let me explain. You see, I’m an emotional chap and I lead with me heart so when I checked the beer list for the first time I immediately jumped to those breweries that I most want to drink at an event like the GBBF. When I saw none of them there I felt a little bit let down by the whole thing. I want to see Thornbridge, I want to see Ramsgate, Marble, Oakham, Pictish, Moor, Darkstar, BrewDog. And I want to see them put out their best beers along with festival specials. The fact that these breweries won’t be well represented is sad news to me. But, my plan is currently to go on the Tuesday and the Saturday. Tuesday will be BSF o’clock and Saturday will mean a day on the British stuff, so hopefully I’ll be able to scour the place and won’t find many me-too bitters but will be given an education in fine British ales. But just think, how much more excited would I be if I knew there would be BrewDog’s there, especially if I could get something like cask Smokehead. Pfwoar!

21.26pm. Talking of the GBBF… I don’t usually drink Mondays to Wednesday’s if I can help it to try and restore some balance for the huge drinking that happens at weekends, but this week I am changing that. I have a plan you see… I don’t want to rock up to the GBBF and drink three pints of US IPA and be rolling on the floor giggling like a little girl while all the big boys sip away at their beers completely unaffected and trying to ignore my slobbering silliness. My thinking is that spending a week drinking strong beers will build up my resilience and I’ll be able to drink hardcore with everyone else. That’s the vain thinking anyway; I very much doubt it’ll work like that, especially when I see all those barrels of beers!

21.30pm. The beer is warming up and… uh oh, do I smell cheese? And I’m struggling to tell if I’m getting a wild-ness to the beer or whether that is purely fruit and barrel. I don’t think my palate is sharp enough to deal with this beer!

21.32pm. If you like Smokehead then check out this totally amazing food and beer pairing and a few incredible recipes – the flapjacks are brilliant.

21.34pm. I’m nearing the end and I’ve finished it fairly quickly. There’s something very drinkable and alluring about the beer and I think that’s all to do with its mystery: I don’t fully understand it but I want to. I’m telling you, you can expect me to write the word mystery a few more times in coming posts, it’s my latest fave beer idea.

21.40pm. This beer is quite something. What that something is I don’t know. I’ve got two more bottles so hopefully I will find out when I drink those.

21.45pm. Done-diddly-done with that one. I don’t quite know else to say so I’m out.
Posted by Mark Dredge