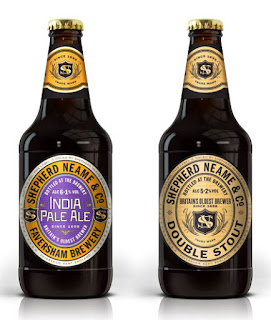 I love that some of the regional breweries are looking sideways, forwards and backwards in order to appeal more broadly to different drinkers. Fuller’s have got the Past Master’s series, the barrel-aged beers and delightful seasonals; Adnams have long made interesting seasonal beers and limited-run specials; Brains have built a craft brewery on the side for producing different beers, including a run of IPAs; just yesterday a bottle of Progress arrived from Black Sheep, a special 10% ABV beer to celebrate 20 years of brewing, and that sits nicely beside their excellent Imperial Stout; and Shepherd Neame have been brewing small batch beers on a handsome little pilot system for a few years now without really shouting about it, then they released Generation Ale, a wonderful 9% ABV strong ale, and now they’ve brought out an India Pale Ale and Double Stout. 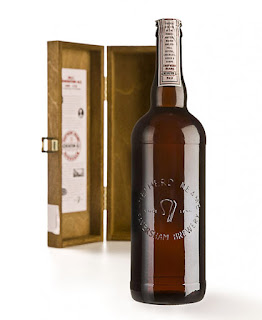 Being a Man of Kent, I’ve grown up with a constant presence of Shepherd Neame, with most drives through the county taking you past at least one pub with their familiar red sign, yet I’ve never really drunk much of the beer. But this year I’ve had four Sheps beers which have massively impressed me. The Generation Ale is an excellent beer, aged in tank for a long time, it’s got a deep complexity of chewy malt and spicy, fragrant hops, think roasted oranges, sherried fruit and toast. There was also a green-hopped beer, 5.5% ABV, and a real ripper of fresh hop flavour, pungent and intense. And now there’s the India Pale Ale and Double Stout, historic-styled, in liquid and design, they look back to old brewing books and make the styles relevant today. 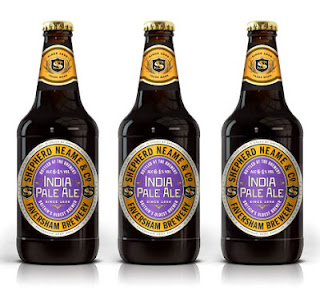 The India Pale Ale (6.1% ABV) is a brutal thwack of Kent-grown Fuggles. Amber in colour, the flavour is a wild spectrum of hop from earth to berries to chocolate and wood. The bitterness is uncompromising, hitting the tongue with bracing force, balanced by caramel and vanilla in the body. It’s got that indefinable Fuggles-thing which makes it such an interesting hop, a flavour that’s almost impossible to describe but marvellously, massively English and in this beer it's really showing off. 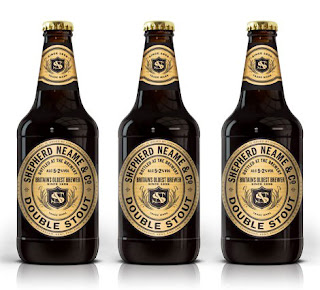 Double Stout (5.2% ABV), for me, is completely evocative of early November. You know how you can walk outside on a clear cold night, when fireworks have been exploding all around, and the air smells of treacle, smoke and leaves. This beer makes me think of that. It’s black, full of a roast bitterness, ashy smoke, liquorice and an intense almost-savoury dry, dark malt character which clings onto a bold smack of bitter hops.

Both beers are excellent. There’s a fullness, complexity and depth to them and they are great side-steps from the core products. I think they look brilliant as well – as soon as I saw the design, I wanted to drink the beers.

It’s great to see regional breweries stepping outside of their best bitter comfort zones and producing wider varieties of beers. One thing most of these regional breweries have over others is history. It’s good to see Shepherd Neame using it and making it relevant today.

All of these images are from Oh Beautiful Beer. From this post and this one. 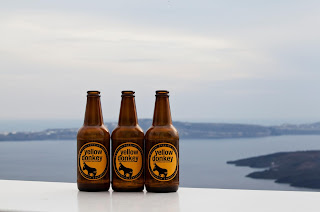 This weather is shit. It’s cold. It’s either grey or night time. My Converse have got holes in them so I get wet feet in the puddles. It sucks.

I want a beer but I don’t want a stout. Drinking stout feels like I’m embracing the weather, welcoming it in. But mourning it feels more appropriate. Mourning the blackness with a black beer that tastes like a bonfire which got extinguished by the rain.

So I need something far cheerier to drink and make me think of sunshine. I need a Yellow Donkey.

SantoriniBrewing Company, in Santorini, Greece, was started by a Greek, a Serbian, an American and an Englishman. I know the Englishman. I like him because he brings me bottles of Yellow Donkey beer. His name is Steve Daniel. He’s a wine buyer and also likes beer. He likes it so much he’s started two breweries. 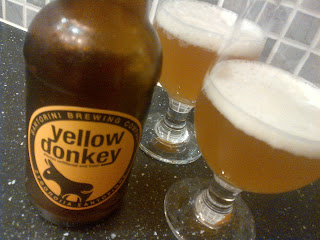 Yellow Donkey is their main product and it’s nothing like the best-known Greek beer, Mythos (which I bloody love and won’t hear a bad word said against it, alright). Yellow Donkey is hopped with Aurora, Styrian Goldings, Cascade and Motueka, it’s 5% ABV, unfiltered and unpasteurised. And it’s great on a hot, sunny day, or a day you want to pretend is hot and sunny. Just think about how good a soft-bodied, smooth, clean pale ale would taste, one with a delicate peppery hop background and a fragrant juicy, pithy, peach and passion fruit aroma. This is new Greek beer and it’s seriously good. It makes me wish I was watching the beautiful sunset.

They make other beers, too. There’s a Red Donkey which uses similar hops but spikes them with a poky Belgian yeast. And Crazy Donkey is an IPA, big and bold, something to share.

Drinking the beer now, I close my eyes and I feel the sun – something about that combination of hops and the soft body evokes summer and freshness. But if you can’t get any Yellow Donkey (and you need to go to Santorini to get it) then don’t worry too much. Like I said, Steve has opened a second brewery and that one’s in London. Look out for Rocky Head. They make a very good new world pale ale that’s bursting with hop freshness. 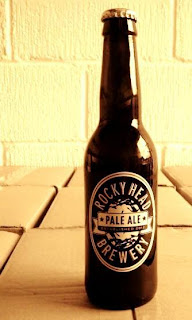 Sometimes it’s nice to have a beer that can take you places. Especially warm, sunny places. Now I want to go and drink it fresh from the brewery...
Posted by Mark Dredge 6 comments Because it’s all about context. And I’m about to get geeky...

It’s more relevant to look at the balance between bitterness and sweetness, so let’s throw away IBUs and bring in the BU:GUs (Bitterness Units: Gravity Unit).

BU:GU is the bitterness ratio and it was first introduced by Ray Daniels in Designing Great Beers (which is a great book!). It measures hop bitterness against malt sweetness where the higher the number, the higher the bitterness is to the sweetness in the beer. It’s calculated by dividing the IBU by the original gravity of the beer. So, with a beer of 25 IBUs and an original gravity of 1050 (you drop the first two digits of the OG unless you’re starting with a monster beer that’s in the 1100s, in which case you just drop the first digit) you get 0.5. On the BU:GU scale, that’s balanced – a score of 1 would be a beer with a very high perceived bitterness whereas 0.1 would be very low. (There’s a list of BU:GUs here and there's a colour chart of BU:GUs here)

But then, to make it less straight-forward, another factor comes in: final gravity, or the apparent attenuation of the beer (the amount of sugars which are left in the finished beer). It’s fine knowing the original gravity but obviously a beer with a lower final gravity (or higher attenuation) will be drier in the finish with less residual sugars, which will then influence the perception of bitterness.

The Mad Alchemist has come up with a formula for figuring out the RelativeBitterness Ratio (RBR) against the same numerical scale as BU:GU (here's another colourful chart). Here’s what they say:

“ADF = Apparent Attenuation. 0.7655 is the average ADF of all beer styles. Since the Relative Bitterness Ratio takes into account balance relative to all beer styles, it uses this as a constant. You are comparing your beer's ADF against the average ADF (0.7655), then adjusting the standard Bitterness Ratio accordingly (it goes up if your ADF is higher than average, down if your ADF is lower than average). Just like BU:GU, higher numbers mean more bitter, lower numbers mean less bitter, and 0.5 is roughly average balance.”

We know the IBU scale and understand that 10 is very low and 100 is very high, so it’ll be just as easy for drinkers to take notice of a BU:GU scale where 0.1 is very low and 1.0 is very high. While IBUs are an interesting piece of information, it means little without measuring it against the sweetness in the beer. That’s where a BU:GU score, worked out according to the Relative Bitterness Ratio, is more relevant and revealing.