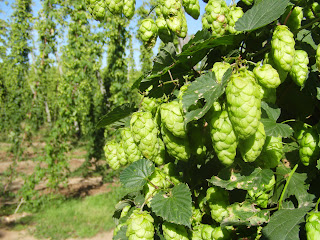 For the first time this year I went to a hop farm during the harvest. The gardens are overflowing with bright green hops while speeding tractors carry piled-high loads of hops to be processed by huge, clunking old machines, filling the air with the dozy, fresh, spicy and grassy aromas. To see the scale and speed of it, to hold a handful of plump, soft hops, to pick them from the bine yourself and rip them open to rub the sticky oil on your fingers, to have your senses flooded by the unique aromas, to see how one variety looks different to another, to be surrounded by the thing which makes you love the taste of beer... it’s evocative and extraordinary and anyone who loves beer has to go to a hop farm when they are harvesting – it gives you a whole new appreciation of where beer’s most amazing flavours come from.

Having lived in Kent my whole life (where almost half of Britain’s hops are now grown), I’ve always had a close link to hops without ever really knowing. There’s the Hop Farm, but I never went there on a school trip; there’s oast houses across the county, the white tips high in the air, but I thought they were just fancy farm houses; those fields with tall trellises which smelt spicy on hots day as we drove through the countryside was just the smell of being outside. 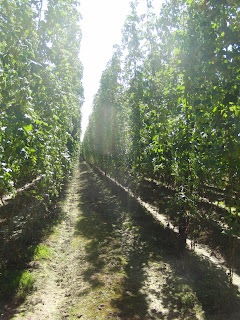 Hops are brilliant and I love them, but British hops are on a bit of a downer at the moment and need some cheering on. One great way of doing this is with green hopped beers. As a beer-loving Man of Kent, the Kent Green Hop Fortnight, which saw 20 breweries make at least one green-hopped beer with fresh Kent hops, made the Invicta horse inside me kick with excitement.

Most hops are dried before they reach the brewhouse. Green-hopped beers are different: picked fresh from the bine, hops go from field to kettle as fast as possible in order to capture the maximum amount of oils into the brew. These volatile oils, many of which are lost to the drying process, give a delicate, fresh cut grassiness, floral and stone fruit flavour different to anything you’ll find in a dried hop. Only brewable during the harvest, these are the ultimate seasonal beer where local hop farms and breweries come together – they also require the brewery to be bold and brave with their hop additions, often needing 10-times the weight of wet to dry. 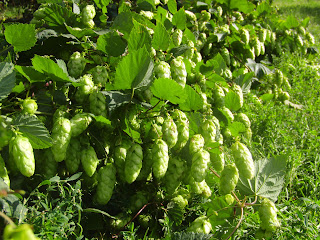 What makes green-hopped beers great is that they somehow capture an essence of the hop garden, a flavour of the countryside, of freshness, evocative of sticky green fingers and grass stains on your knees. Getting 20 of Kent’s breweries together has also highlighted the hop growing in the county as well as showing off the variety of beers brewed in the south east. It also gives a big backslap to British hops in general. That can only be a good thing and while all of the 2012 beers have been drunk, I’m already looking forward to 2013’s harvest when hopefully all of Kent’s breweries will brew again and so will others around the country, really showing off the brilliant hops grown in Britain.
Posted by Mark Dredge