In a quiet quad in the Halandri district of Athens, not far from the Olympic Park, is the sort of place you never want to leave. It’s a proper pub, not a wannabe dressed up pretending to be a pub: there’s dark wood, old beer signs, beer glasses everywhere, bottles lined up, good beer on tap, TV tuned to sports, punk music adds an edge, but more importantly than the aesthetics, there’s the atmosphere, a warming and welcoming vibe as people sit around and chat in small groups, while Fotis, the owner, who knows everyone, pours the pints in between ordering the best beers he can buy (just check out their Facebook galleries to see what they're drinking). It's The Local Pub.

Greece doesn’t have many beer bars. It doesn’t have much of a beer drinking culture; at least not the type of culture we might imagine in Britain. Beer, to most Greeks, is seen as summer refreshment. It’s a cold beer on a hot day. And it’s a lager. They don’t really do bar crawls or anything like that. Beer is something to go with dinner, or before it. But it’s different in The Local Pub. People visit here for the same reasons we visit any beer bar around the world: to drink a variety of different beers.

In The Local Pub you’ll find beers on tap from some of the new and exciting Greek microbreweries. You won’t find these beers in many other places; Fotis orders them especially. He also orders bottles and kegs from around the world so that he can have a broad range of beers on tap. When I’m there Raging Bitch is on tap (at 6 euros a pint it’s cheaper than I’ll drink it in London) and they’ve just got a shipment of BrewDog beers meaning all the locals are sharing bottles of Paradox; but I’m not drinking those because I want the new Greek beers. 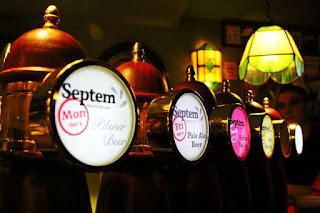 “No Hops, No Glory” is the t-shirt-ready slogan of The Local Pub and that’s definitely what the drinkers are interested in. Septem’s unfiltered Pale Ale is my first beer and it’s a perfect pale ale. So vibrantly juicy with hop flavour (Saaz, Citra, Nelson Sauvin), it’s elegant and light yet loaded with flavour. They also make a brilliant Pilsner (though most Greek drinkers here avoid lagers and pilsners like they’re made with cyanide or something...), this one has got a glorious hop freshness from Perle and Motueka. Then the Santorini's Crazy Donkey comes out. A big booming brilliant IPA loaded with American hops. It’s excellent. And there’s a lot more Greek beer on tap and in the fridges, chosen from the dozen-or-so small breweries and beers you can normally only find local to where it’s brewed.

The Local Pub is the best bar in Greece if you want to drink local beer (and you really should; there’s some fantastic beer being brewed out there right now). It’s also the best place if you want bottles and draft from around the world. Just don’t go looking for a pint of cold lager because you won’t find it there. 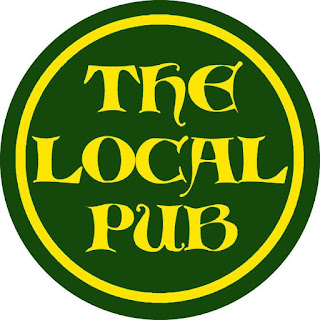 In Athens I stayed at the Civitel Olympic hotel. It's very nice and not far from The Local Pub.
Posted by Mark Dredge 3 comments 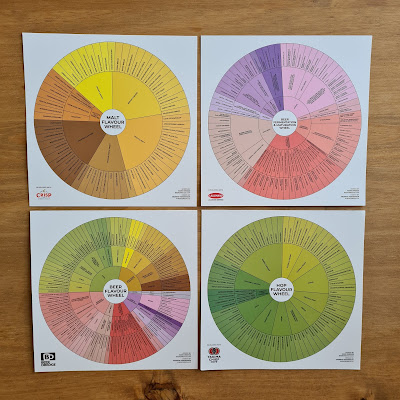 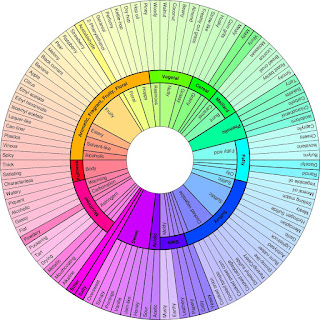 I like the established beer flavour wheel, which was introduced in the 1970s by brewing chemist Dr Morten Meilgaard. It works well, it’s easy to read and it goes into a lot of technical detail. But looking at the wheel it includes compounds such as 2-Phenylethanol and Isoamyl acetate, which are pretty technical pieces of information that aren’t exactly common knowledge (2-Phenylethanol is a rose-like aroma and Isoamyl acetate is banana).

So while I like that wheel, it’s not the most consumer-friendly. Doing some research I found wheels for coffee, chocolate (both from here), wine (which is aroma-specific) and whisky, which are easy to use and interesting and break down the tasting experience into a simpler format, just giving recognisable flavours (mostly, anyway; I had no idea what cineolic or camphoric were in the coffee wheel until I googled them – like spicy, woody bay leaf or tea tree, I think). 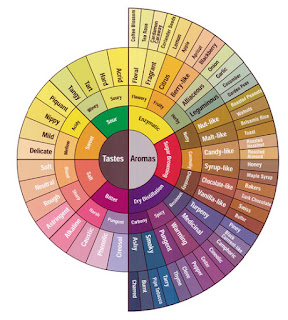 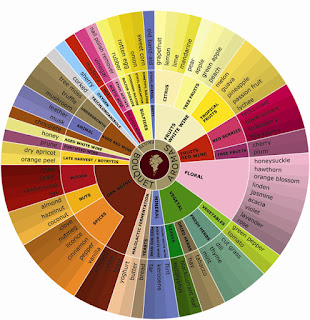 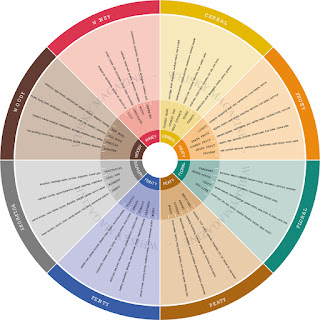 When I was working on Craft Beer World, I thought I’d try and rework the beer wheel to see what I could do. Not as a replacement for the one we all know, but a wheel which is more approachable for general drinkers; one which looks at the specific ingredients and processes of beer, looks at esters and off-flavours, considers mouthfeel, aroma, flavour and the general experience of beer. Not necessarily one for brewers or the technical troubleshooters, I wanted a wheel aimed at looking for the right word to describe how beer tastes or for figuring out what a flavour is and where it might have come from.

It was just an itch-scratching experiment to begin and I started throwing down words and drawing big circles with lots of lines in and around them, but gradually a useable wheel took shape. And that wheel had a nice flow of flavours to it. So I sent it to my editor, who sent it to the (incredibly patient...) designer, who put something together.

The Beer Flavor Wheel (the book is written in American; or, more accurately, I wrote it in English and someone translated it) I come up with is in the book, which went to print this week and will be out in a few months. And here it is below, the first thing I’m allowed to share from Craft Beer World. I’m really pleased with how this wheel has turned out and I hope that it can be something which drinkers find useful. What do you think? 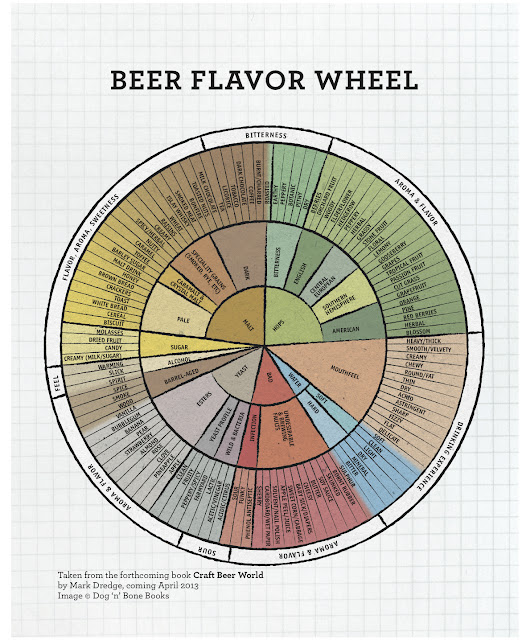 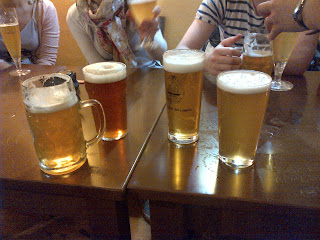 Forget American beer, we get better stuff brewed in Britain now
All those expensive bottles that used to be imported from America will be less attractive compared to the brilliant British-brewed equivalents. Of course, there will be some new American beers arrive which will get us all excited, but mostly we’ll shop British because they are better and fresher.

Americans finally embrace the ‘session’ beer
Session IPA has become an actual thing now and one of the best beers I drank in 2012, at GABF, was Avery 3point5 (I didn’t have the version brewed for the ‘Spoons fest). The rise of the pale and hoppy in Britain will transfer to the US and see a rise in sub-4% beers.

Wheat
How many British breweries make decent wheat beers? I reckon we might see a few more in 2013 following on from beers like Magic Rock Clown Juice and Camden Gentleman’s Wit. I certainly hope that we see more wheat beers – Wits, Hefeweizens, White IPAs, and so on.

British sour beer (and better barrel-aged beers) arrives
The end of 2012 saw more sour beers start to emerge from British breweries. Most of these are Berliner-weisse-style but there are others which are barrel-aged for a long time. More breweries are also experimenting with different yeasts and Brettanomyces is becoming more common. I think we can expect more of these and we can expect the quality to get better and better. Likewise, a better use of barrels will see more beers aged in wood.

Better beer festivals
IndyManBeerCon has kicked it off and I hope there’ll be more festivals that take inspiration from things like Borefts and Copenhagen Beer Celebration. The best breweries, the brewers pouring their beers, small pours, good food. Festivals which celebrate the taste of beer not just the effects of it.

The year of the beer list
Will it finally happen? Will restaurants and bars finally kick out the crap and make more effort with their beer selection? If they don’t, they might get left behind...

Better beer in general
Pubs will move towards local brews from smaller producers and away from national and multi-national products. Even in the last year, drinking in London has changed significantly and it’s now normal to walk into almost any pub and find a decent local beer.

Use British hops!
Use ‘em or lose ‘em. British hops need more of a focus and I hope we see more highly-hopped beers using wonderful British hops to show a side of them that is rarely shown. There are new British hops being developed each year and British brewers need to support the British hop growers.

Rediscover European hops
Now that virtually every brewery in the country uses American hops, the forward-thinking breweries will look to European hops but use them in a new way (the same as they will bring back to focus to British hops) – this might be a Styrian Golding Pale Ale or Saaz IPA or whatever. These hops have wonderful fruity, intense flavour profiles and I want to see more of them.

Cask and keg...
...live happily ever after. Just shut up and just drink whatever beer you want to drink. There’s plenty of choice for everyone now.