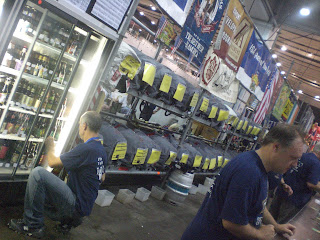 It started early, being woken by the blare of Balham High Street and the head-thumping effects of the British Guild of Beer Writers 21st Anniversary bash the night before. From there came a fry-up and a detoured tube journey to Earls Court where I met Brad outside. Like most I went with the vague and vain plan of starting on a few moderately alcholed brews – something in the 4s, perhaps – but that was immediately forgotten as I ordered a cask Stone IPA to start the day. This was a wise and important choice. The first beer of the day is incredibly important: choose wrongly and the whole day can be ruined in a game of catch-up and no one wants that. The Stone IPA was C-hop-eautiful.

Next I had a Bridgeport IPA which I found uninteresting, but Pete Brown loved the stuff. Then I went for a Victory HopDevil, having been disappointed with the bottles. The cask was much better and I’m sure I got that tangy smack of Nelson Sauvins with even a hint of chocolate orange. Solid stuff but not spot on. Then I threw caution to the wind plumped for Allagash’s Interlude, a 10.5% beer with Brett and aged in wine barrels. Astonishing stuff. Impy Malting – who I was really excited to finally meet! - loved it. Lemony, brett, boozy and big, spicy, woody and just pretty damn cool, although I found it a challenge to get through, to be honest, but that may have been because it was barely the afternoon and I was eager for more, more, more hops! 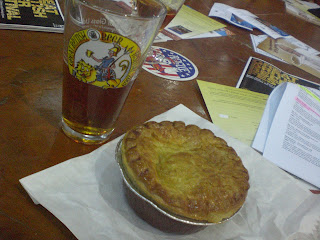 Sierra Nevada Torpedo Extra IPA followed and I attempted some gonzo food and beer pairing with a chicken balti pie. The beer, for me, was lacking pizzazz and was better bottled. Then I had the Sierra Nevada Stout which I found uninspiring and was eclipsed by Rogue’s Chocolate Stout which is hard to describe without saying awesome. It was a glassful of pure cocoa, so full bodied, so much fun to drink. My olfactory gland was pointing to twelve.

Fearing a vicious backlash anytime around three, I dropped down to some weaker beers to attempt to plateau my buzz. I find dark beers with cherries almost irresistible and the Dunham Massey Cherry Chocolate Mild was really interesting and easy drinking. Vanilla chocolate covered cherry drops. I enjoyed this one at the Irish table with Ally, Boak, Laura, Thom and the ever-smiling Beer Nut; a whole bunch of people I’d been wanting to meet. That was a fun table!

Next I went Italian with Montegioco Mummia, a 4.8% sour with a wine character and a smooth, balanced, almost-savoury middle after the tart beginnings. One of the best beers I tried. Keeping on the same lines I went with The Tap’s Beerstand Berlinner Weisse a 3% cloudy, pale beer with a lemon grove nose and a crisp, biscuity flavour. A proper palate cleanser.

We were sitting with Jeff and Jo, a couple of regulars from The Bull (Garrett and Lynne, the landlord and lady were also there), and each beer run returned four third-pints so there was plenty to try. The best was White Shield Czars Imperial Stout which had one of the best noses of the day and a great, thick body of roast malt. Then came another star: Portsmouth’s Milk Coffee Stout which was smooth, sweet, roasty, chocolatey and then flows into a wonderful orangey finish that was just gorgeous. More beers should taste like this!

And next was the star of the day for me: Captain Lawrence’s Captain’s Reserve IPA, a 9%er overflowing with the green grenades and peaches and apricots and a marvelously fresh and bitter finish. If there hadn’t have been 450 other beers to drink I would’ve sat down with quite a few glasses of this. Then another star: a bottle of Dogfish Head’s 90 Minute IPA. I’ve had this before and was disappointed because it totally lacked bitterness but this was totally excellent and lived up to its hype. More US hops next (would you believe?!): Lagunitas IPA which was caramel, piney, pithy hops, pineapple, peach and tropical fruits - yum o’clock. 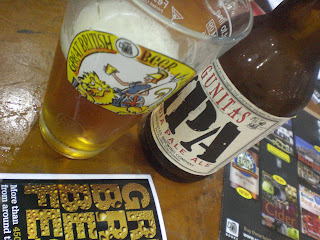 Then some more dark stuff. De Molen had two giant casks handsomely standing behind the bar. I had no idea what was in them but there was no way I was going to miss out on whatever it was! They were special beers. And while we’re on barrel-aged big ones I tried some Cambridge Brewing Company's YouEnjoyMyStout which was like liking the inside of a bourbon barrel that’s been painted with dark chocolate. If you like that kind of thing then it’s wicked. I like that kind of thing.

Finally I grabbed a Galway Hooker right at the end to raise my glass to the then-departed Irish folk. I think my enjoyment of this suffered thanks to a too-hot Cornish pasty scorching my tongue, a fatigued palate and a day on big hops. I did enjoy the beer though and can imagine sinking a few of them on a hot day.

So the beers were good but all of these beers would’ve meant nothing if it hadn’t been for the people I was drinking with. It’s been mentioned here, here, here and here but it’s massively important - it’s the beauty and the soul of these festivals. The joy is in sharing beers and hearing what is good and what can be missed and for all those offering their glass my way and saying those wonderful words: try this!

I either mention everyone or no-one and I’ve decided to go with everyone… here goes (I hope I remembered everyone!). Beer writers on Monday and Tuesday: Zak Avery, Pete Brown and his lovely wife Liz, Jeff Pickthall, Adrian Tierney-Jones, Phil Lowry and Colin from Beermerchants, Melissa Cole, Jeff Bell and Dave who I shared a few fantastic bottles of Harvey’s Imperial Stout with on Monday; also at the BGOWB do was Greg Koch, Steve Williams, Roger Protz (just a handshake and a hello), Jeff Evans and Podge (the Hairy Bikers were also there but I didn’t speak with them). Then at GBBF with Simon who didn’t seem reluctant in his scooping, Barm, Maeib and too-briefly there was Tandleman, along with the other bloggers already mentioned. And then some brewers - Kelly Ryan and Dave from Thornbridge, Justin from Moor Beer, Stu from Crown Brewery (I need to try some of your beers!), Tonie from Hopdaemon (Skrimshander IPA is a local favourite of mine) and Steve from Ramsgate Brewery and Saintsandsinners.

If it wasn’t for the people, for new friends and old ones, then the GBBF would be nothing but a vacuous shell full of casks of beer and solemn faces. Thankfully it was beaming smiles, belly laughs and talking shit in between swigs of some really great beers. If only all beer festivals could be like Trade Day at the GBBF.

Oh, and I bought some bottles home too. 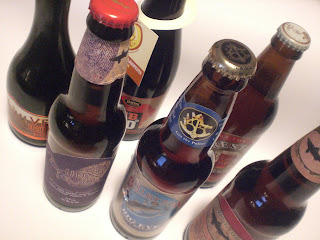 FYI: Adding all those links took for-bloody-ever!! I need a beer after that. And this post is called Take 1 because I'm going back to GBBF for seconds/leftovers on Saturday!