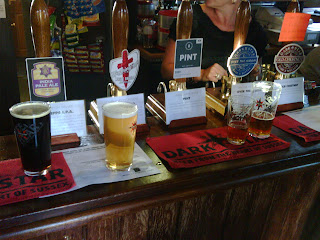 The sun has been high, bright and hot for ages now and it’s bloody lovely. This weekend has been especially glourious.

Thursday it was The Bull for their West Kent Pub of the Year celebration. The cask line-up was superb, as promised, but I was taught me a valuable lesson by the English IPAs: I am not immune to hop bitterness. It was the combination of Pictish Simcoe (wonderful, bitter, fruity) and (a one-off cask of) Marble’s Tawny 3 (seriously one of the most bitter beers I’ve had) plus the jerk chicken which saw my soporific, hoporific demise and left me all hopped out (but it was well worthy it as all the beers were wonderful, including, of course, Marble Pint). Cask Worthington White Shield was a rare and glourious treat of a scoop.

Friday I visited an old favourite: The Man of Kent in Rochester. This place sells up to eight cask beers from Kent plus German lagers, Meantime keg, Fruli, cider and a fridge of bottles. All my cask beers were great (Gadds No.5, Gadds’ Seasider and Whitstable East India Pale Ale) and a bottle of Rochefort 10 went down a glourious treat in the garden after sunset, playing board games with a couple of old mates. 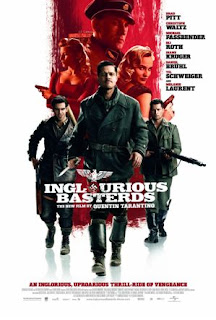 Saturday I went to see Tarantino’s new film, Inglourious Basterds, and it’s honestly one of the best films I’ve ever seen. It’s a complete love letter to cinema and the power of film and reminded me so much of Jean-Luc Godard’s films of the early 1960s. There’s so much that I want to write about this film and I attempted to do so but it started sounding like an essay I’d write at university (I studied the French New Wave and Godard…) so I stopped. It’s tight, sharp, funny, tense, beautiful (Melanie Laurent), well acted, mesmerizing (those long takes, the sweeping shots, the perfect cutting), brutal… Seriously, this film is a complete masterpiece and the final line of the film is utter, glourious perfection.

And then Sunday. Sunny Sunday when England won the ashes. It was a very proud day to be an Englishman and I celebrated with a bottle of Cantillon Kriek and then a Speakeasy Big Daddy IPA from San Francisco, which I will freely admit is terrible planning on my part. I should’ve cracked a Gadds’ Reserve or maybe a JJJ. Still, what a result, and what a glourious weekend. 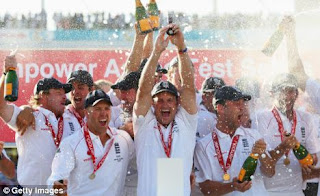 The ashes picture is from here. The beer picture is from my phone. It shows the line-up of beers at The Bull, plus there were a few in the cellar or on the other side of the bar – Darkstar APA, Whim Flower Power. The movie poster is from here. I have no picture of the Man of Kent, but that's glourious too, or glorious, whatever.
Posted by Mark Dredge