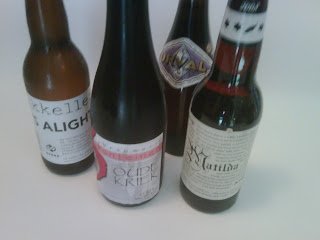 Somehow, in a short space of time, I managed to accumulate quite a collection of wild beers. By wild I don’t just mean crazy-ass beers with high octane hops or hell-straddling booze, what I mean are beers brewed with wild yeast. Now I’ll be frank, my first few experiences with lambic and gueuze summoned responses such as: fuck off, what the fuck, and just fuck. Now I’m on to fuck yeah.

You see, drinking a glass of salmon pink vinegar is not a natural thing to enjoy. But then drinking a glass of gold hop juice isn’t either. My fledgling wild experience was in Croydon’s Beer Circus where the barman informed us it was flat as a witch’s tit. Unsure of whether this euphemism was good or bad, I was soon to discover that it was not good and promptly ordered another Kwak to be able to drink from the cool glass. The next time was a similarly puckering experience. As was the next. But then things started to change…

To really throw myself into a sour endeavor I decided to have a wild night in on my own. For this wild night I opened four beers which use wild yeast. Since then I’ve had even more and got to try a few more at GBBF. My mind has been opened and it’s letting in a beaming, acetic ray and I can’t get enough of it and, long story short, I now love them.

But onto my ‘wild night’, which consisted of Mikkeller’s It’s Alight, 3 Fonteinen Oude Kriek, Goose Island Matilda and Orval. It was a tame wild night, I’ll admit, but still... The Mikkeller was spritzy and lemony with a lovely fragrant sweetness and a kick of tart. It’s a little spicy, nice and crisp and very drinkable, although not all that wild. Not all that wild can be applied to Matilda which was essentially a spicy, tangy Belgian beer with only subconscious hints of brett. It was interesting but not really for me. Orval, which I wrote about here, is now one of my favourite beers and I’ve got a garage full of them. The 3 Fonteinen was altogether different and absolutely bloody lovely. Clean, easy drinking, tart but not too tart, cherries, a dry bite at the end… wonderful. 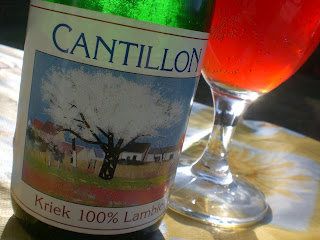 Beyond this night I’ve since had Oude Geuze Boon which I wrote about here and loved. There was Cantillon Kriek 100% Lambic which I’ve had before and hated but this time I really enjoyed it’s woody/savoury quality and the quenching cherries and lemon. There was Ramsgate Brewery’s Reserve red wine barrel aged barley wine which is just remarkable. Plus there were the GBBF beers: Harvey’s Imperial Stout (day before GBBF, shared with Woolpack Dave and Jeff, but close enough), Allagash Interlude and Montegioco Mummia.

I’m really intrigued by wild and sour beers. There’s something raw and elemental about them which fascinates me. And they are fascinating beers because they challenge what our minds think beer is and what it can be. More US breweries are going wild and I really hope that more UK breweries start experimenting with brett and other wild yeasts as it could be a pretty big thing (Reluctant Scooper thinks so too).
Bad picture at the top. My bad. I must've deleted it from the camera before saving it. Thank god for twitpic.
Posted by Mark Dredge