All the commentary has been done on this beer and so now we just need to know what the damn thing tastes like, so here it is, a straight-up tasting note post and nothing else (except this fine piece of cinema). I decided to shoot a video of it for the whole world to see, but I’ll write about it too if you can’t face seeing me sniff, swirl and sip a beer and then struggling to describe it more eloquently than it’s good.

It’s 18.2% but everyone knows that by now, it’s brewed with jasmine and cranberries, aged over French oak chips for a month, dry-hopped to hell and fermented with a champagne yeast. It’s a thick black pour with a surprisingly bubbly head which soon laces sexily. Holding it up to the light shows the faintest glimmer of red which is really quite handsome. The aroma is big, but not as big as I expected. It’s fruity pretty much all the way with cherries and those cranberries, beneath that there’s a nuttiness and beneath that it’s a box of fancy chocolates and some vanilla-laced wood.

Take a mouthful and it’s big. But then 18.2% is pretty massive. It’s sweet first then into darkest dark chocolate and more fruit but then it flips over and gets floral and hoppy bitter. The cherry sweetness is excellent leading it into the darker flavours and the booze. It’s fascinating and intoxicating. The finish is long and it lingers all around; not just on the tongue but around the whole mouth and in the air and it calls you back in for another go. Then there’s a hotness to it, a freshness that develops as the beer warms, but this isn’t bad and if you put the bottle away for a few years (the best before date is 2019!) then this’ll mellow out.

It’s a remarkable beer. I was drinking it for well over an hour and enjoyed each sip. Now I’m going to buy some more and put it away. And if you go to the website then type TOKYO in as the discount code to get 20% off. This means if you get six bottles you essentially get free postage and each beer costs less than £6. That’s a bargain. Binge away people. 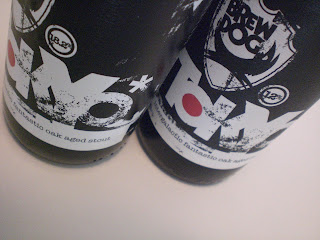 Here’s the old and new* Tokyos. I considered a side-by-side but then thought again… The 12% Tokyo is one of the best beers I’ve had this year and I’ve got a couple left in the cupboard so maybe I’ll get round to a comparison one day, perhaps opening a Mikkeller Black too or a World wide Stout if I can snag a bottle from somewhere! Oh, and one more thing... this beer probably contains about 400 calories per 330ml bottle. Does that bother anyone?!
Posted by Mark Dredge