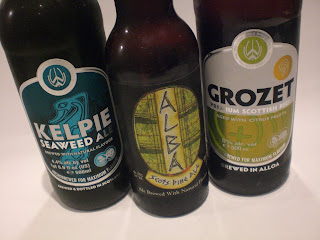 What did beer taste like hundreds of years ago, I often ask myself. What hops did they use in their double IPAs in the 1700s, what kind of whisky barrels did they age their imperial stouts in during the 16th Century? In fact, my enjoyment of lambic is in its olde rustic charm, a taste of beer from many years ago, a mythical-magical concoction of wildly and freely fermenting beers, sweetened with fruit. Luckily for me, Williams Bros have a range of Historic Ales, so I get to try a modern interpretation of what these beers may have been like.

Kelpie is made with seaweed, which isn’t half as horrid as it sounds. Years ago the barley was grown in fields fertilized by seaweed but to recreate that the brewery adds the green stuff into the mash. It’s a deep brown ale with a fruity, chocolatey aroma initially, but sneakily hiding behind this is a waft - a hint - of something saline… a distinct earthy, peppery aroma (and maybe I was just mind-tricked into thinking it, but I could’ve sworn I smelt deep fried seaweed, the stuff from the Chinese – which isn’t even seaweed at all!). It’s a really tasty beer, easy drinking, roasty with a nice background sweetness and some dark stone fruits.

Grozet contains bog myrtle and ripe gooseberries. It’s a pale gold with a fluffy white head. The aroma is light and fruity and inconspicuous which belies the first taste of pale ale with a kick of sour berries, not wild-beer-sour, but fresh fruit sour. It’s bready and clean with a kick of earthy, heathery, flowery hops and then that fruitiness, which mellows as you drink. I could probably drink a few buckets of this.

Alba is a tripel-style beer brewed with spruce and pine. Some of these lovely new American hops taste like pine. This is actually made with it. Pouring it I feared a strange mix of retsina and strong beer, thankfully this fear soon died as it poured an amber-red and wafted a great aroma of berries, fruit and yeast. It’s a big beer with plenty of cakey (Victoria sponge) sweetness, spicy malt, strawberry fruits and a dry, slightly-herby finish. The pine wasn’t sharp and in your face, but chilled out, adding a great depth.

Williams also brew the famous heather ale, Fraoch (I also have one of the 11% versions aged in ex-Sherry and Speyside whisky casks), and Ebulum, an elderberry black ale with a recipe from the 16th century, as part of the Historical Ale range. I don’t imagine that this is exactly (or even close to) what the beer tasted like hundreds of years ago but I like that they are using these traditional ingredients and making them available for the modern drinker – it adds an extra level of engagement to the experience. And they taste pretty good too.

I don’t think I’ve had any Williams Bros Contemporary beers on cask (maybe Midnight Sun?) so that’s something to look out for this year. And this is just another example to raise when I try and qualify the statement: Scotland, they make some of the best beers in the world right now.