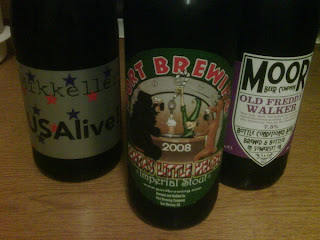 I drank a lot over Christmas. My usual hoarding tendencies were pushed aside as I (almost) freely pulled bottles from the cupboard and ripped the cap off before I could even think twice, which resulted in a festive-flurry of high-end beer-drinking.

This post is ridiculously long and basically a drunk-diary (for more of that see Rabid about Beer) but if I leave it any longer it’ll lose relevance so I figured that I might as well just get it all out in one big, horrifying splurge.

Christmas Eve: Back home at my parents’. I grabbed three big bottles from the cupboard to share with my dad. Mikkeller’s USAlive (Tomahawk, Cascade, Amarillo and brett – pfwoar) is fantastically fruity and peppery with that lift of brett funk, while all being quite understated and very drinkable. Moor’s Old Freddy Walker really was like Christmas pudding in a glass, just with some added chocolate and flowery hops (I’ve had the cask version of this and it’s even better). Port Brewing’s Santa’s Little Helper 2008 finished the night (I couldn’t resist – what better day to drink it on?). It’s a great stout. It tastes just how a 10% stout should. 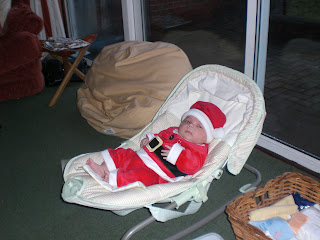 Christmas Day: King of drinking days. Mikkeller Beer Geek Brunch Weasel kicked it off. It’s one helluva beer: massively roasty and full bodied, unctuous, smooth, rich. I love it. As a pre-Christmas treat I bought myself an Orval glass so I filled this next. It was bottled in November, so fresh, but it just confirmed it as (probably) my favourite beer. I like it so much because whenever I have it, it’s both familiar but always a little bit different and always interesting. Then, as it’s Christmas, I took out a Westvleteren 8 and drank some hype. I love the smell of the Westvleterens, this fruit-bready-appley-tea aroma. Flavour-wise it’s dried fruit, bread, chocolate and teacake. Dinner time! With the turkey I had a Chimay Blue 2008 (a Grande one). The fruity, spicy, bready flavour worked perfect with the bird, with the carbonation lifting the richness of it all and lending an earthy sweetness (that the Westvleteren didn’t have) to combat the vegetable mountain. After dinner came a BrewDog 77 Lager, then a Moor JJJ IPA, a 5am Saint and a Saints&Sinners Insomniac. The 77 perked me up. The Moor kicked my arse. The 5am continues to surprise me. The Insomniac finished me off nicely. Good day. I got lots of cool presents, spent lots of time with my family, Lauren and her family, and my 6-week-old nephew Frankie was dressed as santa.

Boxing Day: A let’s-allow-me-to-recover-a-bit day. A glass of red wine with lunch and a bottle of Delerium Christmas in the evening. The beer was like a vision on Santa – massive red body and a fluffy white head. 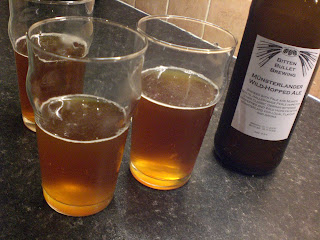 December 27th: I went to Faversham to drink with Pete and David Brissenden. I challenged them to find me a decent pint of Shepherd Neame. They failed. Then Pete took us to a pub which serves his beer. But that was pretty good, so I can’t complain. Then home for some bottles. Starting with Barry’s homebrew. His Wild Hopped beer, which I’ll write more about soon, had this fantastic hint of strawberry which I chased thirstily around the glass. His Schwarzer Peat Porter has distant smoke in the nose but then when you taste it it fills your mouth with a rich body, a billowing smoke, fruits and chocolate – very good (and again I’m constantly surprised by just how good his homebrew is... and it makes me want to brew, too). There was a Lost Abbey 10 Commandments, a 9% Belgian ale with honey, raisins, rosemary and – I think – brett. They were all in there, although the brett was hiding well away. It’s pretty good, estery spice, herby, fruity. A Hanssens Kriek came out to make us pucker our lips. We had some dinner of leftovers, which was delicious (I totally adore Christmas leftovers). After dinner we opened a Westvleteren 12. I wasn’t content with just having the 8 so went straight for the big dog. What made this interesting was that we poured it and then sat around the table for 20 minutes discussing it: what makes a great beer, what makes the best beer in the world, subjectivity, hype. For that reason alone it’s a great beer, even if it doesn’t taste like the best beer in the world. Then came some more of Barry’s beer, this time his Oaked Barley Wine, of which only 12 bottles exist (and we thought that drinking W12 was rare!). We universally loved it. Big, uncompromising, fruity-bitter but then with this current of vanilla-oak running straight down the middle, softening any hop harshness. And we continued... At this point came a massive cheese board with a bottle of 1985 port (those Brissenden’s know how to drink and eat!). And finally, just to top it all off, we had some Tactical Nuclear Penguin. I tried it before but this time I got a proper taste and got to think about it some more. The aroma is seriously good – fresh bread, berries, distant Islay. It looks great too as the long legs stream down the glass. Taste-wise it’s an intense experience. It’s fun but challenging, it’s beer but it’s not. There’s a richness to it, a lot of fruit, that earthy Islay quality and a boozy kick. Pretty damn incredible. 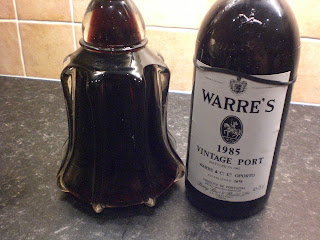 After this came a ‘quiet’ day when I just drank a few bottles, the highlight was an E.S. Bam (currently a bargain at beermerchants) was like a mini-Orval, all peppery and bretty.

Then another big day. Lauren and I met with Mark and his girlfriend Sarah and Pete and his girlfriend Heather and we took our beer widows on a beer tour of London. We started in the Market Porter (can't remember what), then the Princess Louise (OBB of course), the Porterhouse (Oyster Stout, Plain and Hophead) and the White Horse. I literally spent a small fortune on beer that day, especially in the Pony where we opened bottle after bottle of great beer (I actually wrote it as a blog post but didn’t post it, the post was ‘I went to the White Horse and I drank...’ and it was like that memory word game). This is what we had between us in the White Horse (we were sharing, of course): A Baladin Open, an Anchor Christmas 2008, Little Creatures Pale Ale, Rodenbach Grand Cru, 3 Fonteinen Oude Geuze, Orval, Otley Notso, Rochefort 10, Goose Island IPA, Cantillon Rose de Gambrinus, Gales Prize Old Ale 2007 and a Flying Dog Wild Dog Gonzo. That’s pretty good drinking. The highlights were the Baladin Open, the 3 Fonteinen and the Wild Dog Gonzo. Cracking. The fish and chips was very good too. As was the (wonderfully tolerant and beautiful and) lovely company.

I’m still not done. December 30th: I had to go to Bluewater. It was hellish. But on the way home I went to The Bull, Horton Kirby. There was some Thornbridge Brother Rabbit and Rakau and a lot of Marble Manchester Bitter. The Marble was just incredibly good, so vibrantly fruity, so drinkable. It inspired this post. At home that night I opened the three Williams Bros beers which I wrote about yesterday.

New Years Eve (getting there now): I went to Lauren’s parents’ house. I started with a Lindeman’s Cuvee Rene and it was perfect: sprightly, light, zesty, sharp, fruity and smooth with a woody dryness underneath. Fuck Champagne, drink Gueuze, that’s what I say. Then I just opened a few BrewDog’s: Punk, Punk Monk, Paradox Smokehead. And there was a just-past-it Port Brewing Hop 15, which still packed a delicious punch of hops. I saw in the New Year drinking Kwak, which was a little disappointing, but whatever... 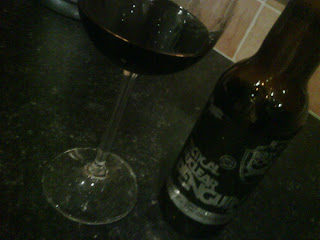 New Years Day (still going): My dad’s birthday so obviously more beer. I cooked dinner too: Steak and ale (Fuller’s London Porter) pie and Pete’s chocolate pots for dessert. We drank: some of the Porter which is a roasty, smoky, rich treat; a Deus (why the hell not?); a Fuller’s ESB; and a sweet kriek with the pudding. Then my body pretty much gave up on me.

I’ve had one beer between then and now; a 5am Saint, which fascinates me more and more every time I drink it – I think it’s great.