How Much Do You Drink?: Learning to Get Drunk, Temperance and Neo-Prohibition 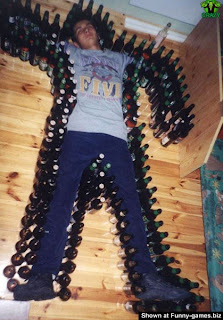 How much do you drink? And, how often do you drink? These are questions I get asked a lot (usually by my mum). In light of the Neo-Prohibition series by Pete Brown (I’ve learnt a lot reading these in the last week) I wondered how much everyone actually drinks, when they drink and the way they drink.

My drinking habits are fairly routine. Friday and Saturday I’m on it and these are my dedicated beer days. Sunday is sometimes a few pints or bottles, sometimes dry. Monday to Wednesday I try to keep beer out and usually manage it. Thursday can go either way.

I try to have dry days as a way of balance; it’d probably be more sensible to spread the week’s worth of drinking out over the full week, but I feel more righteous not imbibing for a couple of days. On the drinking days, it’s usually a few pints or a few bottles if I’m at home. Sometimes it’s a lot more, but that’s quite rare – who actually enjoys the feeling of having too many? Not me.

I don’t think my drinking habits are unusual. I also don’t think they are unsafe because I know what I’m doing and I know my physical limits. When I was at university things were different. Every Friday night, without fail, we played monstrous drinking games. It was usually a crazy version of higher or lower where we ended up drinking ridiculous amounts of the cheapest gin and vodka. It was an organised, focussed attempt to get as drunk as possible. Then we went out and drank more in the student union. And we drank cheap rubbish - alcopops, spirits and mixers. That’s proper binge drinking. I’ve said it before, but it’s a mentality thing: drinking six shots of vodka to get drunk is different from drinking a bottle of wine at home to relax; one is a means to an end, the other is social and relaxing.

And we are, like most others, a nation of social drinkers. Social drinkers aren’t the problem here. It’s the ones who are anti-social with their drinking. Cheap deals on supermarket lager and three-for-one on shots mean that getting alcohol (getting drunk) is easy and very affordable but it’s no cheaper than a box of KFC and that’s equally ‘damaging’. As for anti-social drinking... that happens when your drinking directly affects someone else, physically or mentally (alcoholism, aggressive ‘social’ drinking).

Technically, whenever I choose to drink I binge, yet the thought never crosses my mind that I might be doing wrong. I think the unit scale is only relevant if people are driving, and even then it’s not an exact science. You see, I personally don’t care whether I consume 2 units or 20 units. It’s like worrying about 100 calories or 1000 calories. It’s not about the ‘label’ of units, it’s about the thought process behind the consumption and the mentality of it (plus, have you ever heard someone sitting in the pub saying, ‘no more for me, I’ve reached my four units for the day’?).

What do the government want to do? Is a temperance movement gaining pace? Will a pint soon cost £7? The trouble is, it’s not about the product but it’s how it’s used: use a car sensibly and everything is ok, use it stupidly and people get hurt. Before we can drive we have to take lessons and tests to prove that we are capable of driving. Drinking should be an education too, learning respect, how to act responsibly and the serious consequences (because, there’s no ignoring it, the consequences are serious). Scare-mongering is telling a one-sided point of view; education is about forming balanced opinions. Mark at Real Ale Reviews talks about the PR spin on things and that’s what it is: a quick cosmetic procedure that looks effective to a lot of people in a short amount of time. But it’s cosmetic and doesn’t fix the real, underlying problems.

So out of interest, how much do you drink and when do you drink? Do you think you are unsafe and do you try and balance things out with good diet and exercise? Everything in moderation, so they say.

I found the picture by googling ‘drunk’. Most of the others, oddly, were of Paris Hilton.