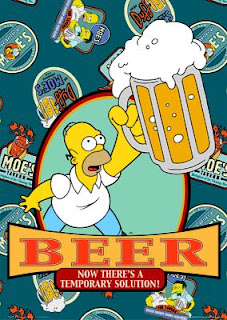 I’ve always thought that animated beer looks completely, totally delicious. When Moe pours Homer an amber glassful of Duff, frothing over at the top, it’s incredibly inviting. He lifts the glass and drinks the whole pint in a second or two, completely satisfied and wanting more, letting out a gasp of pleasure. I know it’s a made-up version of a mega-brand beer but I really want to drink one.

In my mind I can taste it - it’s very full bodied but not sticky or sweet, it’s dry but not bitter, it’s smooth and savoury like crackers or sponge cake (I don’t know why it tastes this way to me...). I think it’s the speed they drink them which makes them look so damn tasty and quenching. The same works for cartoon pizza – it get ravenously hungry when I see characters eating it. Those floppy slices, the disregard for manners, the huge and satisfied mouthfuls, big stomach-filling gulps, the lack of need to chew; I think it’s the lazy man in me that wants to be able to consume effortlessly in just the same way. While we're here, I also like the look of: cartoon chicken wings, cartoon burgers, cartoon steak and cartoon doughnuts.

You can actually buy Duff beer (to my knowledge you can’t buy consumable cartoon pizza...). The bad news is that the Mexican ‘entrepreneur’ behind this hasn’t signed any agreements over the beer and I’m guessing Fox will not be overjoyed at the label looking just like the one in The Simpsons... 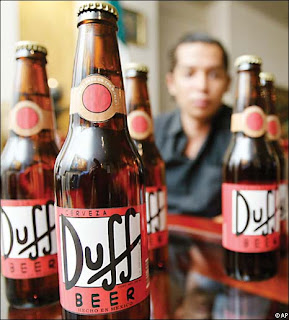 Personally, I don’t want to ever try it. Duff is a fantasy beer of mine (which I’d drink when out for dinner with Marge, especially after seeing her Playboy shoot!). If I had to choose any one beer in the world to drink, real or not, it would quite possibly be Duff.