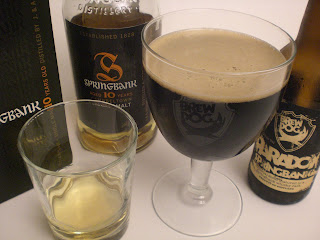 Barrel-aging beers has been the brewing in-thing for the last few years. I’ve had plain oak, god-knows-how-many whisky-barrels, rum-barrel, cider brandy barrel and wine barrel and each adds its own unique quality, some of it from the wood and some from what aged inside it.

Whisky barrels are the most common and the affinity of the grain makes them natural partners. BrewDog’s Paradox series is a great way of showcasing how one beer can be changed dramatically by aging it in different whisky barrels, and the finished beers are understated but still full of character. American versions tend to be more punch-you-in-the-face with bourbon - Goose Island’s Bourbon County Stout is probably the quintessential casing point. Whether subtle or not, I have a bit of a thing for the barrel: I love what the aging can add if it’s successful; I love the extra texture, the wood flavour (oak, vanilla, coconut, a dryness), the spices and sweetness, smoke and earth. But what exact characteristics are transferred from the whisky into the barrel and then in turn from the barrel into the beer?

To try and find out I opened some beer and whisky side-by-side. First, BrewDog’s Paradox Springbank with the Springbank 10 whisky and then Harviestoun’s Ola Dubh 12 with Highland Park 12. Here’s a video (my first in ages) of me opening the Ola Dubh and Highland Park.

The Springbank whisky has distant smoke, a slight saltiness, a floral lightness, dried fruit, spices and ginger. The beer carries over the earthiness and the salty-smoky flavour as well as fruit beneath and some of that spice and coconutty wood to round it all off. I think this is one of the best in the Paradox range with a great balance of sweet and smoky.

The Highland Park 12 is so smooth, it has a great sweetness to it and then hints of earthiness and smoke. It’s incredibly well-balanced, I think. The Ola Dubh 12 is packed with raisins and smoke swirls around inside it adding great complexity. The woody barrel dryness also comes through, lending a near savoury touch at the end. It’s a great beer and a great whisky.

Tasting beer and whisky side by side is an interesting challenge. The barrel imparts certain characteristics into the beer, some of this is from the wood itself (a texture-thing as well as a flavour) and some is from the whisky; some of the whisky flavours are probably dulled by the wood, but others will be amplified. Oak, vanilla and coconut are prominent in barrel-aged stouts and these are from the wood. Smoky flavours seem to elbow their way through to the front of the beer, even when it’s subtle in the whisky, and extra sweetness folds itself in, balancing the roasty-bitter stout (for it is most often stout in the whisky barrels). As for other flavours... I guess I need to drink more beer and whisky!

I’m trying to learn more about whisky. My interest in it has come from drinking beers aged in whisky barrels. For me, it’s the wood character that interests me the most in the finished beers. I love the vanilla and coconut flavour and the toasted oak quality. Lovely. My enjoyment of gueuze is based on the savoury-woody quality that adds such fantastic depth to the beer. Gadds Reserved Barely Wine is a great example of a barley wine aged in an old red wine barrel, another twist on aging, this one with wild yeast character.