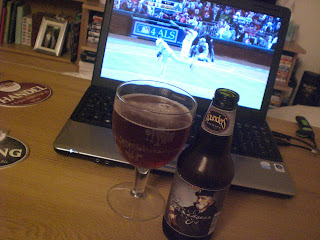 Some posts I write and they get sucked up into the backlog and don’t get around to being posted. Or, like this one, when they are posted they have aged horribly. Luckily, only the background colours of this piece are dated, the full-frontal beers are still in bright colour and relevant. So rather than me re-writing this, just focus on the good stuff, the US beer stuff.

Mmm. Nothing like that first beer refreshment, especially when it’s a 9.8% hoppy, old ale opened at 1.30am after a couple of hours of pre-World Series nap.

Last season I drank a different beer with each game of the World Series (1, 2, 3, 4, 5a, 5b) but, as it wasn’t planned further ahead than the first game, the beer choice wasn’t all that spectacular (there was a Bud and a Root Beer as part of the selection!). I vowed to drink better during the next World Series.

That time has come and I do have better beer, it’s just that I don’t really feel that thirsty at 1am, plus something stops me opening them just for the sake of being able to write a blog post about them. But I’m drinking now (or was when I wrote this) – I’ve got a Founder’s Old Curmudgeon Ale while I watch the fifth game of the Fall Classic.

Old Curmudgeon (from beermerchants) is red/amber with a heady and fruity nose of cherry, bread and old orangey c-hops. It’s malty, full bodied and smooth, it’s fruity, there’s toasty grain and caramel and then into a dry, bitter, woody finish which rolls into a vanilla oakiness further down the glass. The one thing I love about the Founders beers are their labels – they are great to look at – but the double edge to this is that I have no idea about style or ingredients from it (I like my bottles to come with a style – although the Old on this one is a hint – and a geeky list of the hops used). The Founders website describes Old Curmudgeon as an ‘old ale brewed with molasses... then aged in oak.’ It’s not the most refreshing first beer of the day, but then it is approaching 2am by now (or it was...).

I also opened a beer with Game 2 - a Southern Tier Iniquity Black Ale (also from beermerchants - this is a recurring theme...). At 9% it’s black-red, smooth with a great hoppy aroma – oranges and dry, spicy pine – and filled with a caramel and chocolate malt base. The hops live mainly in the nose and flavour and aren’t tongue-smacking-bitter, which is a good thing - it’s one of the first hoppy dark beers which I’ve really enjoyed (I don’t ‘get’ the citrus-floral bitterness and roasty-bitter dark malt combination).

While we’re on US beers (...writing to keep the zzzs away...), I’ve had the Founders Double Trouble (from beermerchants) a couple of times and that’s a wicked IPA with cakey malt and a bitterness which clings and claws through grapefruit, orange pith, tropical fruit and a floral flourish. It’s 9.4% and 86 IBU and just my kind of thing – I’d love to get it super fresh from the brewery. Then the Mikkeller/Three Floyds Oatgoop (from beermerchants), a deliciously drinkable hoppy oat wine with a whole spectrum of malt flavours and a big punch of those deliciously more-ish US hops at the end. There was a Lost Abbey Devotion (from beermerchants), a Belgian-style blonde, orange-gold, zesty and peppery, light and drinkable, fruity – I don’t love blondes as a style but this one I liked a lot. Finally, an Alesmith Yulesmith (from beermerchants) with its caramel sweetness to begin, falling deep into fragrant and floral, then piney and punchy c-hop bitterness which hangs around for ages (it was good but not as awesome as the AleSmith IPA I had with the first game of baseball this year).

The baseball finished last Wednesday night and the bloody Yankees won the World Series. I haven’t watched enough games this year, which is a shame. If nothing else it’s a good excuse to open some new beers and drink them at a stupid time of day, if you are thirsty.

And as you can probably tell, I’ve spent quite a lot of money at beermerchants recently and there are more in the cupboard which I haven’t opened yet – their selection of US beers is broader and more interesting than all the other online beer-sellers and I like them for that. Also, the odd tense-thing going on in this post is, I know, a little confusing. I guess you can expect that with something initially written at 1.30am and then edited at 5.30am a few days later and then edited again (and finally posted) a few more days later at 8pm. I've been getting into some strange writing habits...