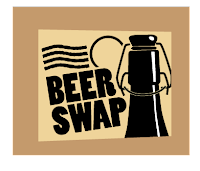 ntion for Beer Swap was to share beer and talk about it with others using social media, bringing people in the beer community together. It was about giving someone else a taste of what you can easily get hold of. It started as a blogger project but through the power of the internet it quickly and excitingly developed into more. But something really interesting has developed since everyone received the names of who they are sending to: we are all searching for local beers, we are trying them, we are enjoying them and then proudly talking about what we have found. I think that’s great and it’s something that I didn’t expect. In my own search I wanted to incorporate where I lived previously and where I live now. The two are only about 20 miles apart but they open up a lot more breweries to choose from. Where I am now allows me to reach into Sussex, where I was before allows me north and east Kent. Maybe this is stretching the 30-mile rule, but I think it’s okay… I wanted to send some bottles from Gadds as I think they are the best brewery around here, but as beermerchants stock them and as they are/were 40 miles away I chose not to. I ended up buying all of the beers in shops that I can walk to and shops which I go or weekly. To be sure I was sending the best stuff, I took the bottles off the shelves and I tried them again (research purposes) and suddenly those bottles which I automatically walked past come alive and knocked me on the head for not drinking them regularly. How could I have just walked past these so often? Ignoring them, looking for something more exotic. Silly me for looking elsewhere. 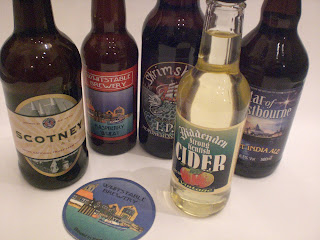 I eventually settled on sending Hopdaemon’s Skrimshander, Whitstable Brewery’s Raspberry Wheat, Westerham’s Little Scotney Pale Ale and Harvey’s Star of Eastbourne. I won’t tell you what they are like, that’s up to Sam Lanes from Real Ale Reviews. I also put a little bottle of Biddenden cider in for him to try as a bonus extra. My box arrived up north a few days ago (although sadly Skrimshander didn’t survive the journey, oops – I’ll send a replacement or two). I know a box is on its way to me – I can’t wait to receive it and drink them! There are still a few weeks left to send, receive, drink and write. I think Beer Swap has been great fun and I love seeing all the #beerswap hashtags coming in (I keep it constantly on my tweetdeck). I’m surprised at how well it’s been taken up and I’m sure there’ll be another in a few months time. For now, what it’s done is show me just how willing we are to share what we have and how eager we are to try new things. It’s also shown that I must look at what’s made on my doorstep as it’s really quite good.