A Campaign for Great British Beer 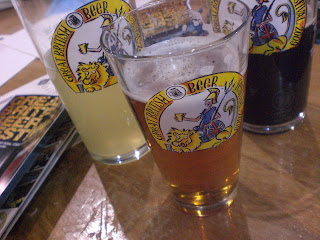 Oliver Thring’s piece for The Guardian’s Word of Mouth has opened up the issue of lager and CAMRA. For me, it’s one of those annoyingly frustrating topics in beer that doesn’t look like going away and just gets more and more irritating, without the hope of resolution.

CAMRA (the clue is in the name) have built themselves around pushing and progressing real ale in Britain and beyond. They have a bad reputation but that’s an aesthetic thing which will take years to shift – it took years to grow it so asking it to change is a moot point. If it wasn’t for CAMRA then beer wouldn’t be where it is now. The trouble is, beer is moving on in the UK and the CAMRA-shackles are slowing it down because of their dominant name and standing in the industry. And this isn’t going to change. CAMRA won’t shift their key ideological stance and rightly so. LOBI are new into the debate (I've written about them before). They have nothing like the standing of CAMRA and I don’t ever expect them to. LOBI are lager, CAMRA are real ale and there’s a loggerhead in the middle which isn’t shifting to allow the two to work together. This is about the loggerhead.

I’ve had cask lager at CAMRA beer festivals and that’s not the issue; it’s the kegged version which crosses the line. Would I like to see keg beer at CAMRA beer festivals? I guess so. Why not? Tandleman (in a great post) points out that CAMRA don’t have a style or category for lagers, which leaves them in the ‘speciality’ section. I think calling it speciality is making it something ‘other’. I’d love to see a cask lager category added for judging and maybe this would encourage brewers, too. But, more lager needs to be brewed over a prolonged period of time before this will happen. As there isn’t the support for it, and it’s generally more expensive to brew, then will this happen?

It’s tempting to look at the US and their dispense system, which is more keg than cask. In terms of brewing they are the front-runners in the beer world right now (sure they don’t have the history, but their influence is undeniable). If more brewers are going to follow the US footsteps then maybe we will see more British beer made for the keg. Maybe this will then see more people generally (as in, the non-real ale crowd; as in, the masses) turned on to the delights of craft brews (the stigma of the handpump is a hard one to shift). I have no problem with keg beer and I’d like to see more of it. See: Meantime, Lovibonds, BrewDog.

CAMRA won’t change their essential belief and why should they. I don’t expect to see kegged, micro-brewed lagers at CAMRA festivals any time soon. I do expect to see more lagers but I also expect them to taste like pale or golden ales, which neither appeals to the lager market nor the real ale market (call it lager, make it taste like lager – I love Schiehallion because it tastes great but it doesn’t taste like lager as I know it). One question, though: LOBI represent lager but most (maybe all) of the brewers they support also brew ale, so do they promote the ale side of things, too? The debate just spins around and around.

For me, it is, and always will be, about Great British Beer. The yeast which ferments it doesn’t bother me. The dispense doesn’t bother me (pour it straight from a jug, I don’t care as long as it tastes good). A re-seeding to cask-condition doesn’t bother me. CO2 doesn’t bother me. The staling reputation of CAMRA does bother me, but as drinkers get younger I think it will change. GBBF shows how popular beer is, even if it is like a big theme park. As for lager and LOBI, Tandleman writes, “they must stand or fall by their own ability to penetrate a market which is likely to be indifferent to them. An inconvenient truth? Maybe, but the market will decide.” I completely agree. It’s hard not to. Craft lagers are going up against the huge brands and they won’t win. It’s logical for an organisation like LOBI to start with the real ale drinkers and work their way out from there – it’s a ready-formed market. Of course, the other side of this asks: will those out-spoken members of CAMRA, whose voices raise above all the others, accept lager? The institution may accept it; the (minority of) members may not.

I don’t like these constant ‘battles’ against CAMRA. I am a member but feel no reason to defend them unless they do wrong (if they banned cask lager then I’d have an issue, although it is still the Campaign for Real Ale...). They have downfalls but it’s those ‘downfalls’ which have elevated them, and British beer, to where it is now and we should all be thankful. From here British beer needs to grow. Anything that hopes to ‘challenge’ CAMRA or promote something similar has to start from the bottom and redress what has already been done. We’re a long way off that. This isn’t a CAMRA vs. Lager/LOBI debate and they have to work together, I just wish that there was a Campaign for Great British Beer - whatever it is and however it’s served - because I think the future of drinking in Britain is much bigger than just cask real ale.

I hope that the size of the debate on The Guardian will open some eyes to beer and give it a more prominent place. I like to think it deserves it. A lot of us drink it and a lot of us really care about it. Barm has also covered the story here, focusing on the CO2 side of things, in a good, to-the-point post.
Posted by Mark Dredge