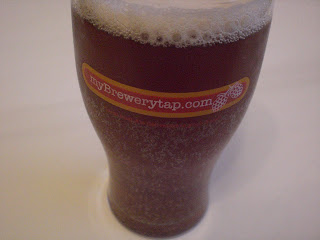 I’m not the first (Pete and Reluctant Scooper) to write about these guys but they were nice enough to box up some beer for me so I’m happy to say what I think of them. It’s myBrewerytap, have a look at their website, it’s pretty good. They sent me a box of British ale from their 52 Week Beer Club.

I’ll admit that I was dubious at first: why would I want 13 random bottles? But when they came I was pleasantly surprised: the beers are different and interesting from all over Britain, you get a pint glass and a bottle opener and a list of tasting notes for the selection.

Golden Warrior's Empire Bitter is clean and tasty with a long, pithy-dry finish. Brentwood Brewing’s Hope and Glory is a red bitter hopped with East Kent Goldings which had a great marmalade and earthy hop flavor which went perfectly with a vegetable curry. Tring’s Death or Glory was all dried fruits and milk chocolate and very drinkable for 7.2%. There’s a Meantime London Stout and a Burton Bridge Porter in there too, plus a few others, Old Bear, Breconshire Brewery, Saffron – lots of new breweries in there for me to try.

It’s a pretty good idea but is this the sort of thing you’d go for with your own cash? Do you like the idea of getting random, new and (hopefully) interesting beers sent to your door (a bit like Beer Swap, really) every three months? Or do you prefer to choose your own bottles from the shop or online?
Posted by Mark Dredge