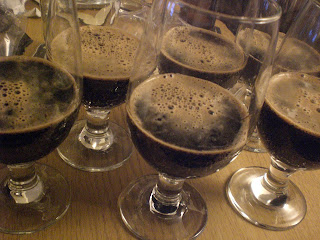 I’d been saving up bottles of stout for ages in the lead up to one big, black blow-out beer night. Two weekends ago I finally held Stout Night to coincide with my 25th birthday. I’ve had a couple of beer nights before, where we open lots of bottles, drink, talk about them and then, for the fun of the competition, we give them a score out of 10. It’s no science, it’s no geek-fest, it’s just good beer and friends. This time around our beer night was themed so that all the beers (except one, but it was as black as the rest so it’s okay) were stouts. The range went from 3% milk stout, through coffee stout, stouts with chilli, barrel-aged stout, stout with wild yeast and up to a very imperial 17.5% stout. Pete, Brad, Lee, Sean and Matt (he doesn't write or tweet, he just drinks the stuff) came to my house to drink it (Pete missed the first half as he was at Twickenham and then had to battle high winds and fallen trees on the train journey). This is what we had and how we scored them (the bracket score of the first eight is the average of the others added on to suggest Pete’s): 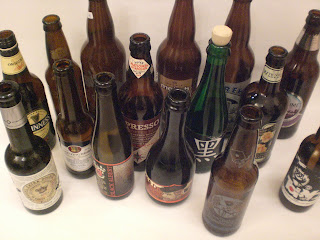 Almost a year old, great beer to start on, bitter chocolate finish was superb for ABV, suffered from over-carbonation, unfortunately. Classic British bottled stout. I got it from beermerchants.

Smoky flavour to it but lacking something in the body and in the middle to make it more drinkable for us, less bitter than Dorothy.

Lactic, smooth, sweet. It is what it is. When would we ever grab a can of this to just drink it?

Big, burnt roasty nose, unexpected monster coffee flavour for ABV, earthy richness but a little thin in the body. If this was 6% with the same flavour then it could be brilliant. I think it’d make a great breakfast beer, if that’s your kind of thing.

Probably the most recognisable beer in the world and the most famous stout. It had to be in the fridge. The flavour is classic and recognisable too. From the bottle it was thinner and fizzer than the keg. We had a long discussion about Guinness and how people feel about it. These scores are based on the bottle.

Fun over. Things step up dramatically here. The highest rated UK beer on ratebeer. Interestingly, the beer was three years old to the very day when we had it (14/11/06). That’s pretty cool. It’s got an amazing nose of chocolate, nutty/oaky/coconut, then a rich, silky and oily body, roasty, raisins and berry sweetness, oak. Wow. I have another bottle of this and I’m so pleased about that, it’s incredible.

Beer brewed with coffee and Belgian chocolate from beermerchants. This was a very memorable beer as a chorus, like a Mexican wave, passed around the room of ‘WOW’ when each of us smelt and then tasted this one. I expected it big, black and bitter. It wasn’t. Lee said it best: ‘Kind of like if Willy Wonka made beer.’ It’s got a candy sugar and cocoa nose, very sweet. And it tastes like this too - sweet, chocolatey, cocoa, not much coffee roastiness. It’s actually laugh-inducing in a good way and really fun to drink. I wouldn’t want much of it, but a glass was great.

From the first ever batch. Not the 18.2% starred version. Thick, dark pour, full roasty nose, smoky with a sweetness in the flavour and roast bitter finish. Very good but not as awesome as the Big One.

At this point Pete called to say he was nearby. To refresh ourselves we shared a bottle of BrewDog in a moment affectionately termed a 'Movember Mouthwash'. We didn’t rate it because it wasn’t black. It was also a bit disappointing but it’s for a good cause. 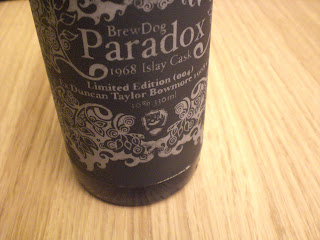 Only 200 bottles of this were made (bottle 124/200). Complete with a great label designed by Johanna Basford. It was aged in an Ex Dunmore Taylor Bowmore 1968 cask. I loved the nose to begin, plumy, smoky, islay, chocolatey but after a while the oxidisation seeped through like cloying tomatoes and vinegar (not undrinkable, just unusual). There’s a lot going on to taste - sourness, roasty, whisky barrel – but the oxidisation was fairly overpowering, unfortunately, and it wasn’t to everyone’s taste.

Following the sharpness in the BrewDog we opened a stout deliberately ‘infected’ with Brettanomyces. It’s full-bodied, roasty and rich like charred steak, then comes the sour, fruity yeast and it’s unique and wonderful with a strange yet very drinkable balance. I got this from Beers of Europe.

Smooth, chocolatey, delicious. Just a masterpiece of a beer and personally I think it deserved higher scores but it suffered for being too well made and not esoteric enough to sit between all the other extreme flavours. 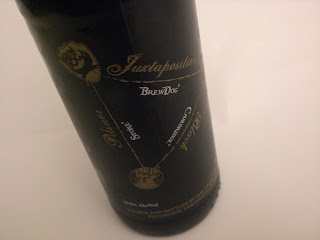 No it’s not a stout, but it is black. I wanted to open this and share it as it’s one of the only bottles in the UK, as far as I know. I’m glad I did. Lots of fruity bitterness, big old c-hops, a lemon disinfectant wipe quality which isn’t a bad thing. The roasty-bitterness is not overpowering which is great as it allows the hops to really come through. This is a very cool beer, I just wish I could get more of it.

Italian imperial stout brewed with dried chilli peppers. It’s sweet and chocolatey, smooth and drinkable with (very) distant earthy pepper warmth at the back of the throat. Good beer, although I would’ve liked a tiny bit more heat. This is another that suffers from being too ‘nice’ and doesn’t punch you in the face with over-the-top flavour.

The big finish. A 17.5% beer. Heady, boozy, thick, vinous, port-like, sweet, warming, bitter like dark chocolate, maybe slightly oaky/woody. Quite similar to BrewDog’s Tokyo* and totally fantastic. Another bottle which I got it from beermerchants and I want more. A lot more.

BrewDog played the encore. A crazy spectrum of flavours which I wrote about here. Roasty, berry-sharp, smoky, all a bit much but still quite enjoyable.

Stout Night finished. After this I walked Matt, Lee and Brad to the station and managed to lose Pete and Sean. Then I found them loitering and we had a dodgy kebab with some really hot chilli sauce. Then we came home and opened a Punk Monk and watched TV.

Beer nights like this are always interesting. Some of the beers deserved higher marks and probably would’ve got them if we hadn’t had so many different, varied, esoteric bottles to open. The scores that they get shouldn’t mean too much and looking back over them I just think, ‘wow, did I/they really give it that mark?!’, but that’s just how it works. I am almost certain that if we did the exact same line-up of beer and people in a few weeks time the scores would be different. But it’s not about that. It’s about sharing a lot of great beer with mates and talking about them and enjoying them.

The top three on the night were:

There were a cluster of beers scoring 48-50, which is also interesting, and any one of these could easily have scored higher on a different night. As for the top three, I’m not surprised Mikkeller won as it’s a great beer, but also, after all that 10% stout, to have something so much bigger really awakened us. The Old Viscosity is just great and the Juxtaposition was a blast of hoppiness which I think we were all craving, so this stood out. I think retrospectively my top three were: Mikkeller Black, Old Viscosity and Good King Henry, so not far off the overall. Now I need to start collecting stout again as my stock has been completely depleted.