Westvleteren 12: The Psychology Behind Drinking the Best Beer in the World

What is the best beer in the world? Ever since I have known about beer, consumed it and read about it, the same beer has been championed as ‘the best’: Westvleteren 12 (see ratebeer or Beer Advocate). But is it really the best?

Westvleteren has a story which raises it up into beer mythology (this post explains it well). It’s hard to get hold of. The brewery tells you what beer is for sale and when. They only make enough to sustain themselves at the monastery. You have to call the brewery/monastery between certain short windows and you can only pick it up between another short window of a few days. It’s limited to three crates per car per month. And you can’t buy all the beers at the same time (they also have a 6 and an 8). And you aren’t supposed to sell it on. It’s a tough one to get hold of. It is coveted. It is prized.

I’ve wanted to try this beer for, like, ever. Everyone wants to drink the best beer in the world, don’t they? But is its status self-perpetuating? And is there a deeper psychological process which makes the drinker expect something amazing and therefore they convince themselves that what they are drinking is amazing? Or on the opposite end - do we raise it up only to face disappointment?

As hard as I tried while drinking it, it is impossible to clear my head of thoughts of greatness. I’ve had the beer for a while now, just waiting, calling me, teasing me with promises. I’d built it up in my mind. I didn’t want to be disappointed. I wanted to be moved. But what if I wasn’t? What if I didn’t particularly care for it? Or didn’t think it’s as good a whole load of other beers? Does that make my tastes wildly different from everyone else? Does that make me – somehow - less of a beer drinker?

Maybe the only real way to try the beer objectively is to have it totally blind. But that’s no fun, is it? This is something that you want to know that you are enjoying. There’s an anticipation to it, an excitement. I want to know that I’m drinking it, I want to pop the golden cap off myself, I want to pour it carefully; I want to be involved with it. But then I am raising its status just by going through this process and loving the careful steps.

I opened a Westveteren 8 last week. It was a good beer but I expected more of it. Beer Advocate has it as the 8th best beer in the world and Rate Beer has it as 18. I thought it was just good. Good isn’t enough! Mind blowing just about suffices. The whole thing with the ratings websites is that they measure hundreds and thousands of votes. Any beer could score maximum points and any could score a big fat zero. What puts a beer in the top few is consistency: if a beer consistently scores high marks then it’ll rise 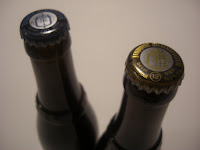 up the list. This happens. Just look at Pliny the Younger. Where was that a few years ago? Where is it now? (Hint: high up)

So what about the Westvleteren 12? It’s 10.2%, brewed with pale malt and dark candy sugar, hopped with Northern Brewer and yeast from Westmalle. It’s unfiltered and bottle conditioned (this book told me that). Making the video was difficult. It’s hard enough saying the right things anyway but when your head is filled with ideas of ‘world beating brilliance’ while trying to be objective and trying to remember what you want to say, it’s tough. And in honesty I am affected by the beer. By the hype. By the lore. And I know this.

When its golden crown comes off it pops gloriously. A funnel of fog wisps out. It pours a russet brown and the aroma booms out the bowl glass. The carbonation is too much to begin, jumping around in my mouth; I want it less lively, I want it to slide around my mouth not bounce around. The nose is dried fruit (you might be able to tell that from the video!), cherry, rum, toasted brown bread and an earthy, woodiness. There’s a lot going on. In the mouth it’s equally complex and rich; rammed with dried fruits, dark cherries, hints of chocolate, booze, toasted grain, brown sugar and nuts. It’s a glorious beast of a beer.

Yet the whole time I was fighting between the thoughts of ‘the best beer’ and the enjoyment of the beer. If anything the pressure of drinking it affected my enjoyment. I wanted more from it but I was also always expecting more to come. Yes it’s a superb beer and just the opening of it feels special, but I genuinely think this affects how the beer is rated overall. And would this beer still score so highly if it was easily available, like the Rochefort or St Bernardus beers?

So is Westvleteren 12 the best beer in the world? It wasn’t the best beer that I’ve ever tasted. But it was excellent (I think it was excellent anyway, maybe my mind was playing tricks?!). In my honest opinion it was too young (much like the 8 I had – the use by date is 19.11.11 if that means anything to anyone?). It needed longer to develop. There was a tinny harshness at the end which would mellow with a few years in the cupboard, I’m sure. I’ll try it again in a year or so and share it with a few beer-loving buddies (I will accept shotguns on the remaining bottles that I have, that’s the fairest way!). Right now it wouldn’t make my ‘Top 10’ list or my own ‘Best Of’ but I’m very glad to have opened it; this was the most excited I was about opening a beer yet and the whole process fascinated me. Although I was left wanting more. I guess it’d be like finally getting a date Cheryl Cole/Sienna Miller and then they leave before dessert (and on the dessert menu is something you really want!). Something like that.

Have you had it and what did you think? Do you reckon the psychology behind opening it plays some part in the way the beer is experienced? And this doesn’t just go for Westvleteren, what about all the other ‘great’ beers? Or great books/movies/albums…

(FYI - and don’t think less of me - I got my beer from ebay! And the suit is because I was drinking the beer after graduating from my Master’s, read about that here. Oh yeah, and visit my youtube channel, it's a veritable hub of beery activity)
Posted by Mark Dredge