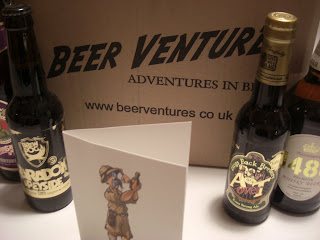 I posted about buying beer a few weeks ago. On the back of that I placed an order with Beer Ventures. I like their choice of beers which covers all styles and all of the world, including some rarer, or harder to come by beers: Brooklyn Black Chocolate Stout (good price too!), Brooklyn Local No.1, Deus Brut des Flandres (I’ve had this once and loved it), magnums of Chimay Grande Reserve and Sam Smith’s Yorkshire Stingo. They’ve also got a lot of the BrewDog range.

The site’s really easy to use, ordering was no problem and the beer arrived super quick (maybe because I entered my company as Pencil & Spoon!!) and they were very well packed away. They also came with tasting notes on the beers that I’d picked, which is a nice touch. My order included: BrewDog’s Speyside, which I’ve never had before, a couple of Tullibardine 1488’s which I think is wonderful and kind of like a grown up Innis & Gunn, I got a Schlenkerla Weizen, an A Over T and a Schneider Aventinus after reading this post (which says hello to me!). There were also 6 other bottles in the case but they were for my boss – I’ve managed to get him into beer so we can now split the P&P on all the beer we buy... Clever!

Check out the Beer Ventures website and their beer selection. I'll be going back to buy from them again soon, I'm sure. Andrew also writes a really cool blog which focuses on food and beer, so he’s a chap after my own heart – and he’s bloody good at it too. And if you place an order tell him I said Hi!
Posted by Mark Dredge