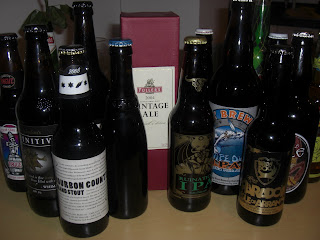 Beer nights rock. A few of us get together, everyone brings a few different bottles, we share them, discuss them and then for a little bit of competition we score each out of 10 to see which beer ends up the highest. It’s a great excuse to drink a load of quality beers with your mates.

There will always be a few expected stars in there and a few duds (that’s how we do it), but you never can predict just how well any particular beers will do and often completely different styles of beer receive similar scores. You do find yourself basing marks on the other scores you’ve already given (‘how many did I give the last beer? Because it wasn’t as good as that…blah blah blah…’). There’s nothing too scientific about it, it’s just guys drinking beer and awarding each individual one they drink a score.

Here’s what we had in the order we had it. We didn’t plan an exact route through the beers, although certain ones were placed at certain points for comparative reasons. And we saved the really big boys until the end. There were three of us - Me, Matt and Sean – and we were in Matt’s flat.

We all loved this IPA but it was marked fairly conservatively as it was the first one up (you don’t want to set too high a benchmarch). It’s hopped with just the Nelson Sauvin and all that mega concentrated fruit flavour booms out the glass. It’s got that addictive IPA quality about it. This was the prototype version.

Us three Men of Kent spent the previous evening knocking back Zeitgeist at the beer’s launch so we wanted to do an immediate comparison between the old and new. The new was smoother, with a greater depth of flavour and topped off with those citrusy hops.

I’ve had it in the cupboard for a while now and thought I’d crack it open to share (beers like this are so much better to share with fellow beer lovers). I wanted this early in the night while we were still fresh. We all knew the mythical status of the brewery and the respect it garners from the beer world so it was surrounded by discussions of psychology (which I’ll write about soon) and how we expect greatness from such beers which then affects our perceptions of them.

None of us had tried this beer before. It pours a deep ruby colour and the nose is all dried fruit sweetness and tea bread. It’s very complex with each mouthful picking out different flavours. It tasted very fresh and clean, a slight bitterness to end, lots of sweet tea, something oaky, candy sugar… there’s a lot going on. It’s really drinkable and moreish but despite the complexity it has a simple, fresh quality to it.

Beer Advocate has this as the 8th best beer in the world. Is it? We didn’t think so. Maybe it gets better with age, maybe we just didn’t fall under the Westy spell. It’s a very very good Belgian beer, just not the best.

So it scored 21, that same as BrewDog’s Zeitgeist. Are they the same in reality? No. But Zeitgeist gets marks because it’s a beer that you can drink lots of, one that can be enjoyed all the time. Westvleteren is completely different, almost incomparable. Maybe we even marked the Westvletern down because it didn’t live up to the heights of greatness that we anticipated.

A dud thrown in for fun and deliberately placed after the Westy 8. The marks speak for themselves but here were a few quotes: ‘it smells like arse’, ‘pointless’, ‘like licking copper pipes, but at least the pipes might have mould on that would taste of something, and probably the most succinct, ‘fucking shit’.

A ‘Smoked Celtic Porter’. It’s got a great looking cappuccino head, there’s a hint of charcoal and bonfire in the nose but the smoke is really lulling and gentle. It’s very smooth and drinkable. We all loved this beer and we all were sad when the bottle was finished. Superb.

None of us had seen or heard of this beer before and we will probably quickly forget it; it was just okay. A fruity dark ale, some spice, cereal and dried fruits. Probably affect by following up the excellent Okell’s Aile.

I didn’t know when to bring this big gun out. It has a ruining effect (100+ IBUs!) on your palate and I didn’t want us to all just be tasting pine, orange and grapefruit for the rest of the night. So we had it before dinner, figuring that the food would clear our palates.

This is one addictively good beer. It’s brutally elegant in the cyclical nature that it makes you drink: sweet first then bitter which blows up in your mouth, then you want the sweetness again to ease the rampant hops and so on and so on… Incredible. Sean is a dark beer guy and Ruination IPA may well have changed his life forever (it changed my life when I first had it!).

Matt’s lives right by a fish and chip shop so we just went there for something cheap and sustaining. I had burger and chips, Matt had sausage and chips and Sean devoured two huge battered sausages and chips (although did later complain of blurred vision). In keeping with the scoring, here’s what we gave the food:

A beer with huge sentimental value for all of us. We have demolished a fair few kegs and bottles of this trashy-delicious beer. It’s a tequila beer that you serve with lime. It’s quite unique, kinda sweet and limey. The flavour is just so familiar to all of us that we were gushing with Desperados-induced memories throughout. This scores highly because we love it for its sentimental value (plus it just tastes pretty good! Our trashy beer of choice!).

Yes, it scored higher than Westvleteren 8!

A copper coloured maibock. Loads of apple and spice. Fairly drinkable but unfortunately it just wasn’t anything special, and by this time we were all getting pretty discernible, wanting nothing less than awesome (that’s what a Desperados will do to you/us!).

We stepped it up from here. This beer is older than the friendship between Matt and I which he bought it in our first year at uni together. We had two and opened one almost two years ago before we left uni. This is a sentimental beer that has been loving looked after.

It was bottle number 05325. Russet coloured with a big sherry and dried fruit nose with caramel and vanilla. It’s gorgeously complex with honeycomb, dates, marmalade, liquorice, oak, sherry and cherry… every mouthful gave us more and more flavours and complexity. We all agreed that it was probably the best beer that we’ve each tried. The sad thing is that we’ve had it for almost 5 years and now it’s gone forever!

I’ve had this knocking around for a while now and thought the beer night would be a great time to open it. If we thought the Fuller’s was unbeatable then this gave it a fair old fight. It’s an amazing beer. Black, oily, huge boozy bourbon nose, vanilla and coconut. It’s thick and rich, woody, vinous, chocolatey with a berry sweetness. It’s complex and warming and flipping good. I’ve got another hiding away for a few years time.

We probably should’ve had this before the Bourbon County as it’s fairly similar just a lot more mellow and toned down. It still stood up to the plate but it was stuck in the shadow of the beer before. But this is one of the best beers I’ve had this year and I love it. It’s chocolate and vanilla and coconut and cherry and ginger and berries and it’s superb. It’s like the Bourbon County’s little brother who may not be as strong and up in your face but is probably more intelligent and complex.

Another big IPA, this one to end off the night. This is hopped with Amarillo, Centennial, Cascade, Simcoe and Summit. It’s golden with a huge orange pith and juice aroma. It’s rich and boozy with hard-hitting, dry tangy hops which just keep getting more and more bitter. There isn’t too much sweetness either, which can be a problem with beers hopped to the eyeballs. A good IPA but after the glories of the Ruination anything big and bitter was going to fall short.

And that was the end of the beer night. Although, there was still one bottle hanging around, but it only seemed fitting to have it in the morning with…

Breakfast... Sausage and black pudding sandwiches. Proper food and just the job to deal with the after effects of the night before. The breakfast scores:

And with breakfast we had…

A rich coffee stout, bitter and roasted and full of proper coffee flavours. It has a great grassy/earthy hop finish which perfectly matches the coffee and dark chocolate notes. I thought this was a great (breakfast) beer, but it was probably marked down overall because of our slightly delicate states.

So there it was. Great fun and a load of great beer. A strong and varied line-up and really interesting to compare so many different styles and flavours. The Fuller’s Vintage was champion of the night but the Goose Island 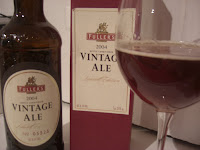 was very close behind and the Ruination was right up there. I guess the big shock was Westvleteren not making the top five and Desperados being in there. The best beers are the best beers, and we agreed universally, but there is also something very important about sentimental value. The Top 5:

Becks Alcohol Free (that was kind of a gimme)

After breakfast we went to the White Horse in Parson’s Green and had a few great beers (Meantime IPA off tap was brilliant) and then out to a Belgian restaurant for dinner (I had Delirium Tremens off tap to start and a Rochefort 8 for main). Then we went to another pub and none of us ordered a beer. I’m guessing we were all feeling pretty beered-out!
Posted by Mark Dredge