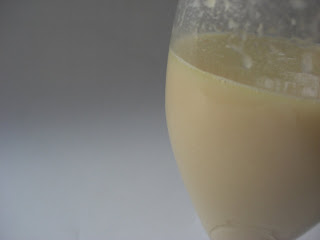 Did anyone watch Heston’s Tudor Feast last week? (If not it’s on again tonight or you can catch it online, it’s well worth watching) I tuned in just in time to catch Protzy and Heston Blumenthal recreating a curious brew called Butterbeer. I then read this post over at Blog O’ Beer and thought I’d give it a try myself.

There is a Harry Potter link, supposedly, but I haven’t read any of the books and only seen a couple of the films. I looked it up in the only way I know and then I found a few recipes. It’s essentially root beer, butterscotch sauce and butter and leaves the drinker feeling warm. Blimey! That’s no drink for a wizard-in-training, is it?!

Anyway, the beery version is a little different to that. I got the recipe from here but there is another one here. It’s basically beer, egg yolks, butter, sugar and nutmeg. A curious combo if you ask me. And I’ve been looking for some of the history behind it but I haven’t found anything yet, anyone know about it?

I followed the recipe, as you do, and then poured it out into my glass (the beer I used was Thornbridge’s Hark as I had just opened a mini-cask of the stuff). The kitchen filled with the smell of buttery nutmeg, which is pretty nice I tell you. The drink itself is a waxy yellow colour and smells just like an egg custard tart. And the taste? It’s odd. Kind of like egg-nog with hops. It’s creamy, rich and warm, unnervingly eggy for a beer, spicy from the nutmeg and sweet from the sugar. I kept sipping it for a while but in the end it made me feel a bit sick.

To conclude: butterbeer is pretty rank. Stick to the beer on its own. I you want to try it it’s easy to make but just be careful you don’t curdle the egg yolks or you'll get scrambled egg chunks in your pint and that is proper minging.
Posted by Mark Dredge