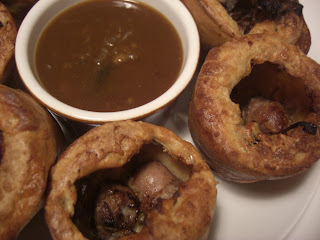 Hunger and thirst alert! I love finding good food and beer matches for all courses and all occasions, but sometimes the best pairings are the simplest ones, don't you think? They are the ones which live in all the best pubs, the foods which we can hold in one hand while we sup a beer in the other. It’s going to be warm and probably meaty. It harks back to childhood foods, to eating with our fingers, to wintry warmers and (kind of ironically/strangely) school dinners.

If I had a pub I’d like to think that I’d have a whole blackboard chalked up with bar snacks. My ideal list would include the following, all homemade, naturally: Sandwiches (fat slices of salt beef, sausage, fish finger, etc.), toasted sandwiches (ham and cheese is king here), big scotch eggs, sausages and mustard, meat and beer pies, pork scratchings and platters of cheese. I’d also like malted Maris Otter grain to nibble on instead of peanuts.

This Toad-In-The-Hole recipe would be right at the top of the list, perfect for any dark beer and the ideal snack for a cold day. The batter is crunchy and soft in different places, the onions are sweet and charred, the sausages hot and meaty and the gravy is thick and unctuous. And it’s all made with a can of beer (possibly my favourite canned beer right now – Twaites’ Dark Mild, which is smooth, nutty, light and fantastically roasty). This beer, with its minimal hop invasion, adds a great flavour throughout.

If you want eight huuuge individual puds and a monster pot of gravy, then follow this.

First you have to make the batter and leave it to chill out for an hour or two. Put the flour and seasoning into a bowl. In a jug measure out the beer (keep the rest of the beer on the side) and milk then add the eggs and whisk it together. Add this to the flour and mix together to make a creamy batter. Pop it in the fridge until required.

Turn the oven to 220C, place a small drizzle of oil into the bottom of each hole of a yorkshire pudding or muffin tray, and heat until smoking. Then chop the onions into thin slices and fry gently in oil (there’s no hurry – you want them sweet and golden), when soft add the finely chopped mushrooms and cook until they let out all their juices and turn dark brown. Chop the sausages into three or four chunks and cook with the onions and mushrooms.

When the oil in the oven is so hot that it sizzles violently when you flick some batter into it, pour the mix into each hole (three-quarters of the way up) and pop a piece of sausage or two into each, along with some onion and mushroom, reserving about half the onion and mushroom mix (just set this aside). Then bake for 30 minutes or until crispy and golden and cooked at the bottom.

To make the gravy, heat the remaining onions until they sizzle again (you’ll probably want an extra splash of oil here, or maybe some butter) and add a spoon of flour, mixing it around. Add the tomato puree and stir in for a minute or two. Deglaze the pan with the stock (don’t use beer or you get a nasty hop tang) and then add the beer and simmer gently for 5 minutes, stirring so that all the flour cooks out and isn't lumpy, until it is thick and rich. Season if you need to.

When the puddings are cooked just pile them high around the pot of gravy and enjoy with a pint of beer. I recommend any dark ales, stouts, porters, milds; anything like that. Particular beers of note, which come to mind, would be: Dorothy Goodbody’s Wholesome Stout, Meantime’s London Porter, Fuller’s London Pride or ESB or 1845 or London Porter, Wychwood’s Hobgoblin, Adnam’s Broadside, Gadd’s Dogbolter… beers with roasted flavours and a nice depth of sweetness which calls out for the meaty gravy.

This is a damn fine beer snack. If ever I saw mini toad-in-the-hole served in a pub then I’d buy it in a second.