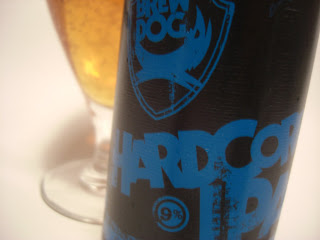 21.10. Great colour to this beer, it’s a vicious orange-gold with a thin yellow chalk-coloured head. This is a 9% ‘explicit imperial ale’ for those not in the know.

21.11. Blimey it’s got a punch to the nose. It’s a booming glassful of oranges, distant grapefruits, pine and cold metal (cold metal? WTF? I don’t know.)

21.12. I’m holding back. I’m soaking it in. I’m letting the anticipation grow, the excitement build. This beer promises 150IBUs. That’s insane (is it even possible?!). I tried the last Hardcore but it wasn’t hardcore enough for me; not hoppy enough and too sweet. Apparently the hop shortage took its toll. Ok, I’m going in, stand back…

21.14. This mother bites. It’s BIG. A monster rising above its former self. The bitterness is clinging, scraping, unending. It’s caramel beneath but that joyously sweet pleasure is short lived before the hops mass-invade with citrus and pine and a dryness unexpected from anything liquid. To quote the BrewDog blog ‘It’s like being raped by a hop monster’.

21.18. I was writing about my brewery visit to Thornbridge but this evening’s beer has stopped that, plus I need a day before I edit that one properly - it’s looong (don’t let that put you off, dear readers).

21.20. Some background on my Friday night: I’m home alone and drinking IPAs (with one exception). I had ribs (using my own recipe designed for BrewDog – let me, or them, know if you want it) for dinner. The beers tonight have gone: 77 Lager (it was meant to be a Punk IPA but I didn’t have one cold), Thornbridge Jaipur then Stone IPA. I've always said I never write after I’ve been drinking… Tonight is different.

21.21. There’s massively condensed tropical sweetness in here, a whole spectrum of hop flavours, most of which my tongue cannot grasp because it has been smashed to pieces. But the important Imperial IPA thing is there: it’s addictively moreish. With each mouthful I want another. I want the sweetness to lull the bitterness but then I crave the bitterness to return.

21.26. Reading a few blogs: Reluctant Scooper’s evening BrewDogging sounds awesome. I’ll be all over that soon at The Bull. And Impy Malting, she’s a great writer (I wrote a few comments on the recent Session post when I was a bit drunk coming home from the pub after the Dark Star at The Bull – hey, The Bull has gotten a lot of plugs here!).

21.37. Mega strong cheddar okay but leaves a strange boozy flavour at the end, not helping either.

21.39. King of the cheese world next: Colston basset and Hardcore IPA = Nasty. I will conclude my little food and beer experiment with this: just drink the beer on its own, get a bit blurry headed and enjoy it.

21.41. Man the bitterness intensifies as you get down. It claws at your throat. It begs you to drink more but pleads that you stop. And it’s full bodied too. I’m making serial spelling mistakes and terrible typos; my brain and fingers are moving at very different speeds and I can’t tell which is going quicker. I fight it.

21.45. This is a challenging beer. It pretty much buggers you up. It’s unrelenting. Monstrous. Insatiable. It’s like a drug and you need the sweetness to ease the bitterness. But I’m feeling relaxed. I’ve got that warmth that the hops bring. I’m kinda sleepy. Chilled out. Probably a bit drunk now. It’s a real rollercoaster.

21.47. BrewDog Hardcore IPA done. It certainly is Hardcore. If you like hops then you gotta try it. If not then you’ll feel like you’ve been attacked by the personification of bitterness. Yikes. If you want it then get it here. I feel abused.
Posted by Mark Dredge