Dark Star at The Bull 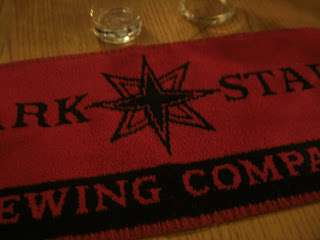 Do you have a favourite pub? Or a favourite place to drink? I’d find it hard to choose just the one, but The Bull in Horton Kirby is speeding to the top of my list with great velocity and ferocity. I just love the place. I’d kinda like to live there, maybe down in the cellar or out in the garden.

I wrote about the Thornbridge showcase they held last month, which was super-cool. This month was the turn of Dark Star. Garrett, the ebullient landlord, loves Dark Star. In fact he loves great beer in general (a sure-fire sign of a top-notch landlord). The beers on offer this time were: Hophead, Over The Moon, Best Bitter, Old Chestnut, Sussex Extra Stout, American Pale Ale and Six Hop Ale. Quite a selection.

I met with the guys from Ale Affinity again and they had a Six Hop lined up for me when I got there as it was running out (thank you!). The Six Hop is superb, incredibly drinkable and smooth with a mouth filling bitterness to end. My second beer was also a Six Hop through fear of it running out.

Old Chestnut followed which was, in all honesty, limp compared to the previous beer, but it was fine because I only had a half. Next I had the Stout which was excellent, all toasty and roasty and delicious.

It was at this point that Toby from Dark Star arrived to talk to the pub about brewing. He was billed as the entertainment for the night (as if the beer and company were not enough!). He explained the whole process and gave a load of really interesting inside info. It’s kinda cool to drink beer while a brewer tells you how it’s made. Especially when the beer tastes so good.

The pub has also evolved its bottle selection. Rochefort 10 now sits in the fridge behind the bar (the fridge, FYI, is turned up/down so that it isn’t too cold for the beer – I like that. A lot.) along with a few other Euro treats. In the cellar they had some Mikkeller beers too. We tried the Stateside IPA and All Others Pale and they are proper American-style hop rockets, flipping good and juiced-up with citrusy, piney hops. I think we also got a bottle of the Struise Mikkeller but by this time I was drinking a bottle of the Dark Star imperial stout and memories of it are a bit hazy!

The food is great too, served up by Lynne. One interesting thing. They don’t have a Cask Marque at the pub. The reason: for CM accreditation you need to serve your beers between 11-13 degrees. Garrett serves his (in perfect condition every time) at 15, and he still thinks this is too cold. I’ve got a lot of respect for this man. He rocks.

Oh yeah, big news (and I’m reticent to say because I want it all for myself, but Garret deserves to sell as much beer as he can humanly pump)… The next showcase is BrewDog! I have never had a BrewDog from anything other than a bottle so I am bloody excited. The beers that will be on offer (I think this is a preliminary list, so it might change, check out Ale Affinity as they’ll throw out a proper announcement sometime soon): Trashy Blonde, Zeitgeist, Punk IPA, RipTide, Paradox Isle of Arran and Divine Rebel. Bring it on! Paradox out of the cask?! Just let me at it! It’s the 2-5 April. You really should go along.