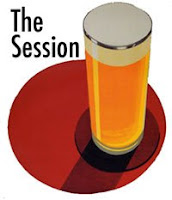 Time for The Session, which this month is hosted by The Beer Nut with the topic of ‘Love Lager’. I was unsure what to write and where to begin for this one, so I started start right back at the beginning…

I’d never tried it. It’s what the Dads drink. It’s for adults. They stand around with the stubby green bottles they picked up on cruises to France when my sister and I picked up cool crisps and loads of chocolate. Those little green bottles. Their horrible smell, the strange and nasty taste, the cool beads of condensation. He used to drink them most in summer; the smell of fresh cut grass and barbequing sausages. Me raking the lawn after he had cut it, me copying him drinking from my bottle of juice. Working together in the small garden. The satisfied gulp, the relaxed sigh. I’d never tried it.

Then I was allowed to drink some. ‘Eurgh,’ I’d groan as the men laughed back. ‘One day you’ll love it’ they told me. It started with lemonade. Then I’d add orange cordial. I didn’t like the funny taste, the bitterness, but it’s what the men were drinking. The men who were standing around chatting, laughing, talking about cars and football and work. I didn’t know anything about that. I was still a boy. I didn’t drink beer.

Then I started to drink it. All my friends were. It was about fitting in, belonging, brotherhood, growing up. Talking to girls, smoking, drinking too much, misbehaving. Experimenting and learning limits. It was the beer that my Dad now offered to me. Those little green bottles. I was starting to act like the men do. I was drinking their drink. Lager. 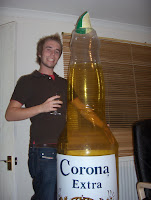 Then I drank it all the time. It was the first pint I got served in the pub. It was the second, third and forth… It was drinking from the can with friends. It was getting drunk. It was behaving like an adult but acting like a child. I was 17 and it was pints at lunchtime. It was the laughter and the fun. It was the getting away with it. It was the rock concert where I was pushed deep into the sweaty, bouncing crowd. The nightclub who served all drinks for a pound before 10. It was drinking in the park. Not being asked for ID. Being an adult, doing adult things, drinking lager: ‘Do you want a beer?’

And it never goes. It is everywhere. It’s part of being a man, of being a part of something, of becoming an adult, of belonging. It’s for celebrating or commiserating. It’s comfortable, always the same, it doesn’t change.

It’s the cans around the student house. The cold bottle on a hot 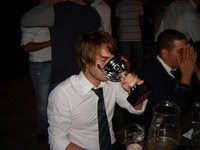 day. ‘Something to drink?’ ‘A beer’. A bottle while cooking dinner. The nights out where lager was all they had. The drinking games. The parties where everyone drank the same beer because it was free and the bath tub was filled with cans. The making a fool of yourself, losing the drinking game, the throwing up; the bad times. Or the good. The time we won the cricket tournament and I drank beer straight from the trophy. The pint after the work is done. The taste of achievement. The lying around and drinking a cold pint in the hot afternoon sun when I should’ve been studying. The celebration when it’s all over.

It’s no longer the drink of choice, but it’s still there. And there are new ones. Better ones. Or just bottles of the old. The Budweiser which tastes so familiar despite never drinking it. The cold Kronenbourg from the fridge to slake a thirst without having to choose from the beer collection. The pint just because. Mythos in the hot Greek sun, a bottle while cooking meat on the barbeque, the stubby green bottle. Still being able to enjoy something simple. There is always a beer behind a story. Always a memory.

A pint of lager: something which has shaped the person that I have become; something that is very important. It’s about growing up. Learning. Belonging. Shaping ideas, making choices, becoming who I am.
Posted by Mark Dredge