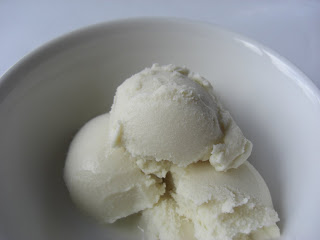 A while back I made ice cream from BrewDog’s glorious RipTide stout. Ever since then I’ve been in the mood to try out different beers to see what kinds of flavours they bring to ice cream.

There’s so much potential for using different beers to affect different outcomes in dishes. Carbonade, stews, pies, breads, pannacottas and ice cream would all use the same base recipes each time you make them but the beer which is added will change what the final product is like, and that’s pretty cool – it’s something I’ll be experimenting with quite a lot. 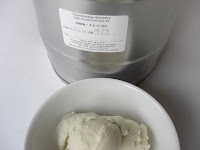 Last weekend I opened a 9-pint mini-keg of Thornbridge Hark which I had brought back from my visit to the Brewery. Most of this was for me to drink but I also decided to do a bit of work in the kitchen. This ‘work’ was a carbonade, beer bread and an ice cream (plus this crazy experiment at Butterbeer). The beer is a 4.8% ‘winter warmer’ brewed with a little rye malt, crystallised ginger, coriander and caraway seeds and Seville orange zest. It’s fruity, spicy, zesty, clean and crisp and it’s all underpinned with a fantastic rye bread flavour which is just delicious.

The RipTide ice cream is fantastic. It’s chocolatey and packed with fantastic roast malt flavours, keeping the essence of the beer but fading out before the hops kick in. And in ice cream you don’t really want hops as they leave a dry, strange and unwelcome tang. Saying that, I will soon try a big IPA and see how that comes out, maybe Goose Island as it’s got that huge orange and caramel mix which could be very tasty (it’ll probably need some fruit going in though to emphasize the juicy hops, and it’ll want less of the beer).

When I first tried the Hark I wasn’t sure how it’d translate as an ice cream as it has a decent dose of hops in it, giving a little floral bouquet and some dryness, but what the hell, this was an experiment and I would still have 8 ½ pints left! So I made up the batch and you know what? It’s really good! What you get is like a brown bread/rye bread ice cream with hints of banana and citrusy spice. I gauged it just right on the beer front and there was no hop bitterness coming through to kick the back of the throat. A really good result. And it has left me wanting to try and ice cream sandwich with it in, maybe with a little strawberry jam too! Yum!

I am lazy when it comes to my ice cream base but I am also scared of getting scrambled eggs when making custard, so I simply combine condensed milk with double cream and then add whatever else I want. It’s so easy but it just works perfectly. This hardly needs a recipe but here it is, and it makes around a litre. But here’s a warning: the amount of beer that you add varies between each different one that you choose; 300ml is not a blanket amount that works for every beer and most will want slightly less than this so start at 150ml-200ml and work your way up, trying it along the way.

Mix them all together and churn it in an ice cream machine then eat. I told you it didn’t need a recipe!

So Beer Ice Cream Take Two (well, technically Take Three as I made a tiny batch of BrewDog Paradox Isle of Arran which rocked) was a great success. I’ve got my eye on a strong Belgian ale next, probably Chimay. Then I’ll be testing out the IPA.

Any suggestions of other beers which could or do make amazing ice creams?