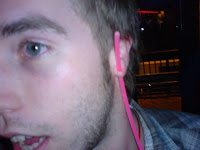 I’ve just taken out my last remaining piercing. At one point, a few years ago, I had 10 metal bits somewhere or other in my body and I’ve had 13 piercings altogether (more if you include ‘stretching’). Now there are none. I’ve only got tattoos left. I love tattoos but I only have three. I’d have an arm full if I could afford it (I’d probably ask this person to design some of it). It’s a work of art. An art collection. I often think - when pissed - how I’d like the outline of a pint on my arse. Maybe I’ll get it done one day. Let’s say if I win beer writer of the year! I don’t quite know how to feel now that I have no piercings left. These were things I had done between 16 and 18 years old. I’m a different person now and they weren’t a part of me in the way they used to be. I was rebelling back then, I think. Against what, I don’t know, but I was rebelling something. Either that or it was a creative way of expressing myself. I was also addicted to the thrill of getting them done. There’s the worry, the excitement, the nerves, the anticipation. It’s a heightened sense of your self. The clinical smell of the studio. The pictures of other piercings all around. You know it’s going to hurt. But you think it’s going to look great. You sit in the chair, a pair of tweezers clamped around whatever you are getting modified, the spot is cleaned, it tingles and numbs and stings, then the needle comes out, your heartbeat races, you breathe quicker, you brace yourself. The needle goes in. It goes through. It burns, it sears, it slides clean in and out the other side, a barbell pushes through a plastic tube, it’s just hanging there, suspended, stuck in it’s new home, a new piece of me. The balls are tightened on each end. It’s done. It still burns. It hangs heavily. A foreign object stuck in me. I’m not used to how it feels, it’s heavy. It takes some getting used to. There’s a huge adrenaline rush like nothing else. Light-headed, full of energy, laughing, excited. What do you think? No it didn’t hurt that much. That’s what they always ask: did it hurt?
You will not believe how difficult it was to find a decent picture for this post. In every one of me where there’s a piercing in shot I am completely wasted or it’s totally unpublishable (because I’m completely wasted). It also seems the digital camera wasn’t invented until 2005, at least that’s how far back my photos go. And if you want to know what I had pierced then use this: if it dangled it got pierced. I got my tongue pierced twice and I twice ended up in hospital because things went 'a bit wrong' (none because of my tongue - one was an adventurous ear piercing which required me to be on a drip for two days). For a while I also had 8mm holes in each ear (as the picture shows). Crazy. One time (read: more than one time) someone placed a straw through my ear and drank their drink. If you are interested, check out BMEzine, I used to love it! I kind of miss them already.
Posted by Mark Dredge