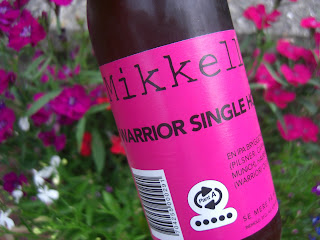 I’ve opened a few new beers recently as well as trying to get through some of the bottles which have been filling the cupboards and fridge. Here's a few notes.

Ramsgate Brewery Gadds’ India 8.3%
A cloudy pale ale. Boozy nose of candy sugar alongside citrus and earthy hops. Really surprising mouthfeel, all thick and biscuity and bready without tipping over into too-sweet. It’s got big hops, earthy and peppery and strong and there’s more booze too. There’s a great middle moment when you aren’t sure whether it’ll go sweet or bitter, it balances on a tiny point, see- 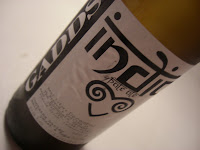 sawing, then drops over into bitterness. Really drinkable for the strength and even though it wasn’t super-fresh it still tasted good. I went down to the brewery last weekend so expect more from Ramsgate to come.

Lovibonds Henley Dark 4.8%
Coca-cola colour with a thick and creamy tan head. Aromas of milky chocolate and sweet smoke. Drinking it brings out much more roasted bitterness with dark chocolate and coffee alongside smoke and a pleasing earthiness. It’s packed with flavour and complexity which is great for its fairly modest strength. As it warms it gets earthier and the smoke comes through more (edging towards a great phenolic complexity). I served this with lasagne and it worked really well – the smoke buffers the rich tomato sauce.

Mikkeller Stateside IPA 7%
Hopped to buggery with Chinook, Cascade and Centennial (that's what the bottle says, the website says it's got Amarillo?). It’s a deep amber with little carbonation. The nose gives off caramel, bread, pine, booze and burnt tropical fruit. There’s plenty of sweetness which is balanced by a great bitterness with pine, grass, grapefruit, tangerine and tropical fruits. I don’t think it was especially fresh and so it could be even better, but I really enjoyed this (but then how could a beer with those hops not be good?!).

Kasteel Cru Rose 5.0%
I might write-up a larger blog about this beer but in the meantime let me tell you this: the beer is pointless and completely shit. One word: drainpour.

Nils Oscar God Lager 5.3%
I didn’t expect too much with this one but was pleasantly surprised. It’s a great golden colour with a nose of brown bread, toast and distant lemony hops. The flavours are really clean and crisp with plenty of biscuity malt and some toffee bread finished off with some simple, earthy-lemony hops. Nice one. Follow the link to go to beermerchants, that's where I got mine from.

Kasteel Triple 11%
I don’t really get triples. Maybe I just haven’t had one that I love yet. This was gold with tiny streams of bubbles. It’s boozy at the back of the throat with a gin-like dryness. There’s some spice, something vaguely sweet and more booze. To be honest it just didn’t taste quite right. 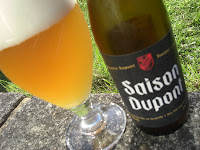 Brasserie Dupont Saison Dupont 6.5%
I was sitting in the garden reading in the sun and needed a cold, refreshing beer to open. This was my choice and I’m glad I went for it. Wheaty, earthy, spicy with a faint orange peel aroma and distant twangs of sourness. It’s fresh and quenching, some fruitiness, some earthiness, some peppery spice and a great lingering dry bitterness.

Mikkeller Warrior Single Hop 6.9%
A flame colour with a juicy aroma of peach, orange and mango closely flanked by a leathery-pineness. It’s completely hop-heavy and condensed in its bitterness but it’s great for that reason. It’s very bitter, fruity, floral, pithy and roasted tropical fruits with that requisite clawing finish. Nice and I think this one is up there alongside the Cascade single hopper. I picked this up from Gadds' Beer Shop, where you can also get the India.
Posted by Mark Dredge