The Bull’s Best of The Best Beer Festival 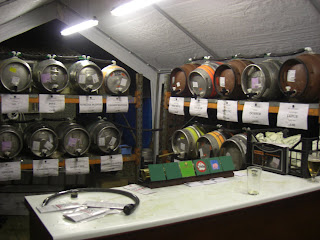 Here’s a round-up of last week’s beer festival at The Bull. Garrett and Lynne, the landlord and lady, put on a fantastic event and I really hope they’re pleased with how it all went. The beer was spot-on, the food was excellent, the garden was a great place to hang out (the weather stayed dry too) and the atmosphere was perfect. To Garrett and Lynne: It’s you two who make The Bull my favourite pub. You are willing to go that much further than everyone else. Thank you.

To set the scene: I was there on Thursday with Pete from Pete’s Food Blog and Brad and James and friends from Ale Affinity. On Friday Pete and Brad were back again (we couldn’t stay away!), both with their younger brothers. I was with my mate Matt. And Steve from Beer Justice and Phil from Beermerchants were there too. The barbeque filled the cool air of the pub garden with grilling meat and Garrett’s irrepressible laugh rang around his kingdom as everyone chinked glasses and talked and laughed and got pretty damn merry. 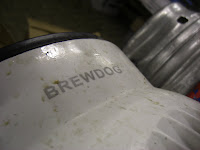 I started down low, way down low at a measly 2.7% with BrewDog’s Edge. But measly it ain’t: this 2.7% minx is a flavour bomb. So full bodied, a perfect creamy head, chocolate roasted notes and much more hop bitterness than I expected. One surprising beer that you could drink all night. Next Pete and I went tag-team-style on Saltaire’s Amarillo Gold and BrewDog's 77 Lager (the Amarillo in each being a cozy and chance partnership). Amarillo Gold was very pale, loads of neat Maris Otter grain and a delicately refreshing lemony-citrus finish. The 77 lager was surprising fruity with a great body and good hop bitterness - good cask lager action indeed.

More double-teaming next with Thornbridge Kipling and BrewDog's Dogma. Now it kills me to say this but none of the Thornbridge beers we tried were up to their usual standard. I don’t know why this was, but the fact that it was across the board is worrying. Now Dogma. Here’s something you might not have read around these parts before, but here goes: I don’t care all that much for bottled Dogma or its previous incarnation, Speedball. It does nothing for me except make me mildly giddy. However, on cask it’s much better. There was honey and vanilla and blackcurrant and toast and another creamy head (they give good head at BrewDog) all wrapped up in a slick body. Nice. We also opened a bottle of unlabelled BrewDog’s Atlantic IPA to share around the bench. Lightning doesn’t strike twice, you say? Well guess what… It was a thumbs down from a table of BrewDog fans. I like the oxidized notes in Zephyr but in the Atlantic IPA they are too much (sour and cement-like) and it doesn’t mix well with the whisky warmth and the punchy-earthy-fruity-bitter beer. 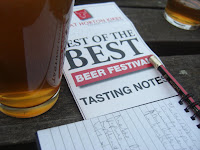 I believe we had a burger here. It was very good and very necessary.

Next came two beers from Marble: Pint and Dobber. Garrett told us that Dobber was the bigger brother of Pint and he was spot on. Pint was pale, clean, crisp, quenching, gluggable and finished with juicy citrus hop bitterness. I absolutely loved this beer. Then I tried Dobber and fell in love again. It’s a fantastic beer, loads of C-hop sexiness (I believe I bet this blog at one point that it contains Centennials!), orange and a juicy-pithy clawing finish with a great toffee body. Super, super stuff. And honestly, I would’ve been happy to drink just those two all night, but I was on a mission.

Let’s zip through in a montage: In the following hour, or so, I had: a mouthful of Jaipur, my favourite cask beer, and it was a shadow of itself and this brought a tear and a sorrowful swoon. This swoon was not cured by the half of Pitfield IPA which was boozy like nail polish, had a too-sweet candy sugar body and didn’t deliver on the hops. I had a taste of the Saltaire Blackberry Cascade which I liked until just after I swallowed when it became sickly like a chewy sweet. I appear to have tried Ginger Marble and remember not enjoying that too much. I’m not a big raw ginger fan and this tasted like raw ginger. It was hot stuff (literally as I’m posting this Reluctant Scooper has just put up something about Marble Ginger – he likes it more than I do!). A lot of the others loved it though and I think it could be a grower. Thornbridge Red Brick was just not right. And there was a glug of BrewDog’s Trashy Blonde at some point. This was Pete’s beer and I’m pretty sure he enjoyed it. Phew.

This was where we stepped it up. Another tag-team effort went down here to wrestle BrewDog’s Devine Rebel and the Pitfield Imperial Stout into submission. I can proudly say that we won the battle. The Pitfield was bloody marvelous, all rich and roasty with chocolate and coffee and dark fruits and a super earthiness. This stuff rocks. As does Devine Rebel. It’s honey and marmalade, some whisky smokiness way back in there, sweet but not too sweet, a complex sipper rolling around. Thursday done.

The morning after prompted my post about hangover breakfasts and I didn’t truly recover until I had the first pint on Friday, when I was back on it in a flash. I obviously went for a pint of Pint and it was even better than the day before. After this we went and got on the beer train to Ramsgate, Matt’s local brewery (I didn’t have them on Thursday knowing he was down on Friday). Gadds’ No.3 was a great pint as always; caramel, fruit, earthy hops; a Kent classic that I wanted to drink a lot of. Then came the Thoroughly Modern Mild which had a big sweetness with honey and marmalade (kind of like Devine Rebel) and was an easy-drinking 6% - a mild for winter, when Mild Month really should be. Dr. Sunshine’s Special Friendly followed, a wheat beer with a classic wheaty taste (quality beer writing there), vanilla, citrus and a good butterscotch quality (not a bad butterscotch quality). I’m not a wheat beer lover but I could’ve had a lot more of this. Thumbs up to Ramsgate!

Next I tried Saltaire's Sublime Blonde, which I think was Phil’s. The resounding verdict was that it tasted like Foster’s Twist: lager and lime. Not great. There was a Rye Smile in there but bugger me if I remember what that tasted like. All I know is that we ordered a Gadds’ No.7 and a Rye Smile and it took Matt and me a few sips to work out which was which. After this I went back and had more of my favourite’s from Thursday. Another Dobber, an Edge and another Pitfield Imperial Stout. And that’s where the night ended, I think. There may have been more. I lost track and was just having a good time by then. 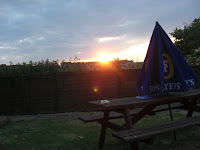 There were a few beers which didn’t come on while I was there, the notable one being Thornbridge’s Epic Halcyon (here is the full festival list). The good thing is that now I get to look forward to it another time!

And there we are. I don’t think this is particularly illuminating but I wanted to share my thoughts about the beer and the fun that we had. This was a great festival because it was small and friendly and the beer was fantastic. Marble Dobber won beer of the festival and I can’t argue with that. Marble Pint would have been a close contender for my vote and that’ll be a beer I look out for from now on. Gadds’ No.3 was flawless and Pitfield’s Imperial Stout was epic. You can’t expect to love every beer which is on. Enjoyment is so subjective and the beers which I liked others didn’t and vice versa. That’s why we drink with friends; to compare, to discuss, to try other beers. I had a great time as you can probably tell. Cheers Garrett and Lynne!
Posted by Mark Dredge