Beer and Food Night at Pete's 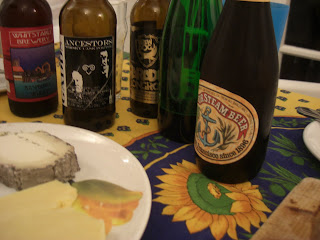 Last weekend I went down to Pete’s for dinner and to open a few bottles of beer. He knocked up wicked array of food and he’s written about the dinner on his blog, so I won’t go into the food stuff other than to say this: Pete is a bloody good cook and his dessert was flipping fantastic (the dessert recipe is on his blog post). As he covered the food side, I’ll get the beers stuff down.

We started in the best possible way: a bottle of Punk IPA to ease us in. Then came an Boon Oude Kriek, all light and blush and sweet and sour with cherries and an air of a cool summer breeze brushing against a clean t-shirt standing out in the countryside. It was a great pre-dinner drink.

We had a Rother Valley Boadicea Pale Ale which was pretty average, kind of citrusy. Then we stepped up a bit and opened a De Dolle Extra Stout. It looks like coca-cola with a frothy head, it smells of coffee, chocolate, smoke and spice. It’s got a great balance to it, an elegant lightness, an earthy hop finish. We enjoyed this one a lot.

With the main of sausage stew we had Hopdaemon’s Leviathan, a 6% ruby-coloured strong ale which is very sweet and malty with dark, roasted fruit. It worked well with the dinner (it was a ‘let’s just open this one!’) but for me it was just a little too cloying on it’s own – an earthy porter would’ve been a great match. Hopdaemon’s Skrimshander IPA, on the other hand, is a superb beer.

It was here that we opened the star beer of the night: Gadds’ Ancestors. A 9% whisky-barrel 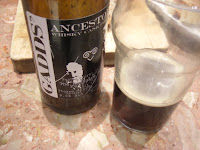 aged porter. I really enjoy BrewDog’s Paradox Smokehead for it’s earthy-salty-phenolic quality, but I thought the Gadds’ was even better than that. Smoke, a phenolic, medicinal note and dark chocolate all lavishing around the glass. In the mouth it’s so smooth and clean, so chocolatey and smoky and rich but at the same time elegantly subtle with just the faintest hints of some berry sourness that worked oh-so well. Bloody good. I only wish I’d bought a few more (although, as of this weekend beermerchants are now stocking a few Ramsgate beers - there's a blog post here too).

Then dessert and the star pairing: cherry beer with a dark chocolate and sour cherry pot. So simple, so delicious and just perfect pairing. The cherry beer was just the usual red-paper-wrapped one from the supermarket but it was ideal, mixing with the heavy roast bitterness in the pudding and catching onto the pockets of sour cherry. A ballet of fruity and bitter-sweet with roasty and dark. Also with dessert we opened a BrewDog Longrow which is all smoke, cherry and chocolate and fantastic. The beer is totally excellent but it didn’t work as a pairing this time, which just meant that we finished the bottle after dessert with blue cheese - yay!

We opened a Cooper’s Pale Ale at one point but I barely had any before throwing it down the sink – I didn’t think much of that one! There was a BrewDog Hardcore IPA to go with the strong cheddar and this was a good match, although maybe slightly overpowered by the brash hops. An Anchor Steam beer also popped up, a classic. And then I had to leave for the train (with bottles left unopened!) home and I was absolutely stuffed.

I do love nights of eating good food and drinking good beer just for the sheer hell of it.
Posted by Mark Dredge