In Search of a Local

I’ve never really had anywhere that I’d call my local; somewhere close that I’d want to drink in regularly, whether it's just a quick pint after work or a long session after work. At university there were a few places spread over the three years but nothing that I’d qualify as ‘my local’. Now that I’m living in a new town I saw the opportunity to find somewhere new to drink, so on Friday I went out looking for one.

I don't want or expect much from a local other than a decent pint and a good atmosphere (if I want more then I can travel and get more), but I had a criteria to judge the pubs against. Location: How far away is it? What’s near it? What do I pass on the way there and back? For example, if it’s near the supermarket then it possibly allows me a sneaky pint because ‘there were, like, really long queues in the shop’. Beer, Range/Quality/Price: What beer do they have – cask, keg and bottle? How well is it kept? How much does it cost me for a round? Atmosphere: What it’s like inside? Quality of the landlord and locals. Decoration. The way it ‘feels’. Extras: Do they serve food and what’s the quality, range and price? Any entertainment, music, quizzes, bar games, TV, etc? Is there a garden? 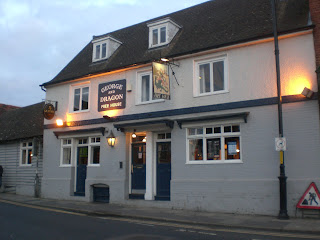 Pub 1: George and Dragon.
Location: Five-minutes walk, out of the town. Not near much and wouldn’t ever be ‘just passing’. Beer: Harvey’s Best Bitter and Bombardier on cask; Guinness, Strongbow, Bulmers, Kronenbourg, Fosters, etc, keg; Bud and Newcastle Brown in the fridge. My Harvey’s was fairly well kept, no complaints. A pint and a diet coke cost £3.85. Atmosphere: Large place, lots of tables; bit of a locals’ local, busy with salubrious old chaps; working man club feel to it; pretty bad service. Extras: Lots of TVs turned to Sky Sports, two pool tables (which we couldn’t get to work) and free dartboard. Didn’t see anyone eating. Overall: Not terrible, beer fine, ok for watching TV or playing darts. Lauren didn’t like it. 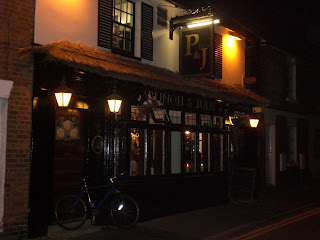 Pub 2: Punch & Judy.
Location: 12 minute walk from the flat, but close to the mainline train station. Have to walk the length of the high street to get there and back so pass a lot of things on the way, including supermarkets and takeaways. Beer: Harvey’s Best Bitter, Sharp’s Doom Bar and Flowers IPA on cask; Fosters, Carling, Kronenbourg, Strongbow, Guinness on keg; Bud and Newcastle Brown in the fridge. I had another Harvey’s which was better than the previous one. Pint and a coke cost £4.10. Atmosphere: Nice feel to the place, good mix of people, music playing, friendly bar man, cosy. Extras: bar billiards (which swallowed my pound so I had to get the barman to refund it), regular live music, cool jukebox. Overall: Really nice little pub, friendly and welcoming, fun, good range of beer. I was given an old £5 note though, which was annoying. Lauren liked this one. 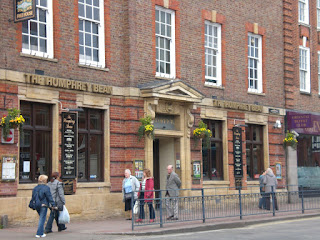 Pub 3: The Humphrey Bean - Wetherspoons.
Location: Five-minute walk down the high street, two-minutes from work, right in the centre of everything and I pass it almost every day. Beer: Six cask beers on, I think – Hobgoblin, Bank’s and Taylor Dragon Slayer, Leveller, Ruddles, Abbot and Pedigree; usual bottles, fairly cider-heavy; usual keg stuff including Tuborg, etc. My Hobgoblin was no good, but then I haven’t enjoyed it since they dropped the ABV from 5.2%. Lauren’s diet coke was also pretty crappy. It cost £3.50 (they wouldn’t accept the bum old fiver either…!). Atmosphere: As usual, not too busy for 8pm on Friday night. There were bouncers on the door, which is never a particularly good sign. Amusingly, we did see two laddish oiks dressed exactly the same, walk into the pub. That made us laugh; they looked like right twats. It’s a big ‘Spoons though, lots of seating for food, a huge garden out the back. Extras: Lots of food, cheap deals, quiz machines, free wifi, free condiments (I don’t want to pay for mustard when they give them away!). Overall: Not great. Bad beer this time. But I can’t help but be drawn back to it. I have had a couple of good pints in there and I’m now in the habit of ‘popping in just to see what’s on’. It’s not the best pub but not the worst. 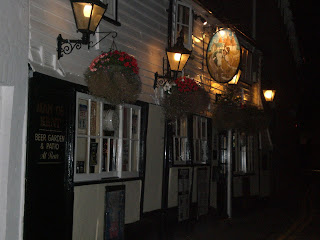 Pub 4: The Man of Kent.
Location: The closest pub to me, less than a three-minute walk. I pass it on the way home from work (and on the way to work…). Beer: Harvey’s Best Bitter on both handpulls; Strongbow, Guinness, Fosters, etc, on keg; lots of alcopops in the fridge. The worst kept Harvey’s of the three. It cost £4.10 for ale and coke. Atmosphere: Ok, fairly busy, small pub but lots of seating and different areas. Didn’t feel especially comfortable, lacking atmosphere. Extras: Music, TV showing Sky Sports, not sure about food as we didn’t see anyone eating. Overall: Disappointing. Beer wasn’t good and Lauren’s coke wasn’t great (it seems there is disparity in how coke is kept, as well as the ale). They also looked at me as if I was trying to pay with soiled tissue for handing over the dodgy note (what?! I didn’t want to be carrying it around all night!); I didn’t feel welcome after that, as if idle local gossip was beginning. Neither of us liked it.

So my search for a local was disappointing and my earlier fear that Tonbridge is a beer wasteland was confirmed. Part of the problem is that I now compare every pub to The Bull and very few can ever come close. The Punch and Judy is a pub that I’d want to drink in regularly as it felt like the best place to hang out, but it’s the furthest away. The Wetherspoons looks like it’ll be the pub I drink in most often, although I can be door-to-door with The Rake in under an hour, so that’s always an option...!

After the little crawl I came home and opened two bottles of beer and enjoyed them more than the cask stuff I'd had out in the pubs, then I pawed through the beer collection and saw some cracking bottles in there, begging to be drunk. And then I realised something… if it's just about the beer then the best place to drink in Tonbridge is probably my flat. But as we all know, it isn't just the beer.