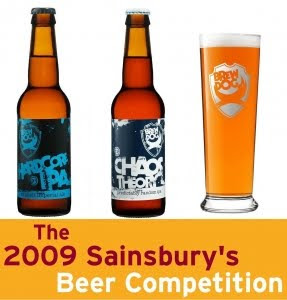 I don’t buy many beers in the supermarket anymore. There are a few which I pick up whenever I see them, the others I get when I want a specific beer. The supermarket is now the place for me to get those everyday drinking beers, just like it’s the place where I get my everyday eating stuff. But how can I resist a beer competition, eh?

Part of me wanted to buy a bottle of each beer in Sainsbury’s competition, part of me didn’t. The part that did wanted to do so out of pure thirsty curiosity, for the tick and the scoop. The part that didn’t feared a line-up of average beers. In the end I didn’t buy them all. What I did do, of course, was stock up on BrewDog’s, happy to see 7% and 9% uber-hoppy beers on the supermarket shelf for a little as £1.29, significantly reduced if it’s 3 for 2 (I also saw it for £1.59 and on a 4 for 3).

Williams Bros did pretty well in the competition, getting four beers out there. It seems that every other blogger got sent free bottles to review. I didn’t. I paid for mine. To be honest, I found an underlying earthy smokiness (the water, perhaps) which wasn't quite to my taste and left me a little disappointed overall, which was a real shame. These are not bad beers at all, it’s just that I’d heard a lot about them recently and they didn’t live up to my expectation. The 80/- was a little unsatisfying but I’d definitely try the lager again though and I should've picked up an IPA (Midnight Sun is a cracker and I want to try some more of their historical beers). Williams are definitely a brewery to keep an eye on, I think.

I thought Wood’s Shropshire Lass, hopped with Fuggles and Cascades and dressed in a decidedly effeminate yellow and lilac outfit, was pretty good - fruity and very drinkable - and I’d like to try it on cask. I also had a couple of darker beers too. Wolf’s Woild Moild was decent enough and Allgates' Porteresque was roasty but I thought it was a little too thin and sharp, nice earthy bitterness though. For me, the best beer in the festival – by a long way - was Chaos Theory. It’s a fabulous beer and when it’s opened as fresh as a daisy it’s a real bitter-fruity bomb. I like it a lot.

While we’re on supermarket beer, I found 77 lager, zeitgeist, Flying Dog Classic Pale Ale and Gonzo Imperial Porter in Tesco at last. I’m very happy to see all of these in the supermarket, especially if the Tesco also stocks Sierra Nevada Pale Ale, some Chimays and Orval. The Classic Pale Ale was one of the nicest bottles of everyday drinking beer I’ve had in a while and the Gonzo was really very good indeed (bold, smooth, chocolatey, rich, nibbling hops) – I just need to find a Tesco near me which sells them because they are ones to keep in the fridge.

I’ve written about supermarket beer before, here and here. Oh, and that image at the top is Brewdog's from the post I linked to above.
Posted by Mark Dredge