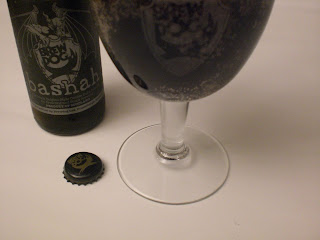 You know me; I want to try each new BrewDog with such voracious thirst that I don’t think twice about ordering every time a new beer is released. I’m not ashamed by this and in actual fact I love that a brewery can build up the same sense of anticipation that a blockbuster movie or new CD from a favourite band can, and that’s cool. At the weekend I finally got my paws on the newest BrewDogs: bashah and Nanny State.

Bashah first, brewed in collaboration with Stone. The eyes vote first and they give a massive thumbs up for the awesome bottle label. In the glass the thumbs rise again: opaque brown-black with a lacing tan head. Then it’s the aroma of chocolate and spice, an earthy bitterness, fruity hops with hints of pineapple and candy sugar. It’s a nose that makes me do those olfactory summersaults, loving it more with each sniff, dipping my nose so close that it comes out with a drip of beer on the end. And then the taste: chocolate, roasty and spicy, earthy then into those fruity hops, teasing and intriguing instead of thump-you-in-the-head, then a cakey sweetness and more fruit and all the time that chocolate. And that fruit. What is that fruit? I love that fruit. The only thing I’d question is the style - a Black Belgian Double India Pale Ale – but I quite like it, it’s very… BrewDog and Stone. I’ll happily go all out and say that this is one of the best beers I’ve had this year. 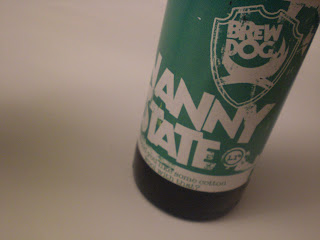 But then there’s Nanny State. If bashah fingered the style over substance button, this beer full-on fists it. And I’ll be honest: I was wary. I said in this post that I would’ve loved them to make a 1% beer with moderate bitterness that I could happily drink a few pints of and not fall over after. I understand why BrewDog made this beer, I like why they made it, but I don’t like what they actually made. Firstly, it tastes like How To Disappear Completely. I was impressed that they used a lot of hops the first time, the second time it’s like an inferior cover track. Secondly, it’s just too bitter to be drinkable and the whole point of a 1.1% beer is for it to be drinkable (unless it’s ‘point’ is to provoke…); I put this one down and felt hop-stoopid and soporific as if I’d just finished a 9% DIPA without the boozy warmth. Thirdly, it’s great that this beer is weak enough that it doesn’t qualify for booze tax, but why didn’t that pass on to me? I paid £2.49 a bottle, which is the same price as bashah. If it’s that expensive because of the number of hops used then it’s a waste of hops and I just wasted money on a publicity stunt.

Not everyone likes BrewDog, I understand that and they surely understand that too. Personally, I love them, but sometimes you have to tell the ones you love that you don’t like it when they call you ‘pudding’, or when they always put your things away in different places every bloody time they put them away. Bashah is one of the best beers they’ve made, in my opinion, and it proves just how good they are be at brewing (see also: Tokyo*, zeitgeist, Zephyr). Nanny State shows how Punk marketing isn’t enough to make a good beer and, after all, it has to taste nice above anything else.

Their latest hullabaloo kicks off tomorrow in London. I will commit my guesses to the page, just in case I’m right: they offer to sell ‘shares’ in the brewery so we can be part owners, or they open up their doors for license brewing so that beer from around the world can be made and distributed quicker and cheaper in the UK (hopefully the 'new dog' in town will be from Dogfish Head...). I will be there tomorrow, I can't wait.
Posted by Mark Dredge