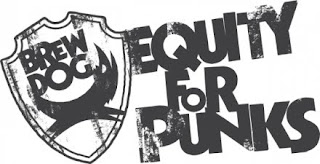 That BrewDog thing. It’s been the beer event that we’ve been waiting for thanks to their viral marketing and social media campaign. Now we all know that it’s Equity for Punks there seems to be a lull as if it isn’t as significant or groundbreaking as perhaps everyone hoped. But come on, this is a big deal. And never ones to shy away and get on with things quietly, this is also a brave move: they are offering out their pup for anyone who wants a piece of it.

The financial guff involved in this deal literally means nothing to me; ask me to string together a sentence and I’ll do it, ask me to answer a mathematical puzzle and I fall into a swirling tomb of numbers and symbols. What I do know is this: if I give them £230 then I will ‘own’ a piece of BrewDog. I will also get 20% off any orders I make online and with each beer I buy I am financially supporting my investment. The amount of equity I’d get for my money, assuming I buy just one share, is 0.0009%. This isn’t really all that much, so do I want to own such a tiny amount of them? You know what, that’s not the point.

I think I’ll be echoing the sentiments of others when I say that I’d like to be a part of Equity for Punk just to be a part of the brand. I wouldn’t go into it expecting to make a handsome profit but I would go into it to support what they do. You see, I like James and Martin. And I like what they do, in and out of the brewery. They are young, they come across as shy in person (passion is a great thing to fight through shyness) and they are ultimately just trying to run their own business and make a living. Punk marketing, viral campaigns, controversy - it’s just part of what they do and an integral part of their brand. And what a brand they have developed in such a short period of time.

I guess the question that needs answering is will I buy equity? The answer is no, not right now (beer blogging doesn’t pay so well and £230 is a lot of money to me). The price might put a lot of people off, especially at the younger end of drinking where their brand affinity is closest, but that’s the amount they want for one share and one thing is for sure with BrewDog: they know what they want and they don’t want to compromise. If I had the money then I’m pretty sure that I would buy in, even if it’s only one share, and in the future then maybe I will. But like I said, it wouldn’t be for the financial investment. It would be for support, kind of like buying a football season ticket (of course, this sort of thing has been done with football clubs too).

I buy into the BrewDog ethos and mentality every time I purchase and drink their beers. I feel a kinship to the way they think, I like their beers, I like that their beers have become events, I like talking about their beers, I like drinking their beers, I like how non-beer people now know about BrewDog and I like what they are doing to the British brewing scene. Equity for Punks is a brave, balls-out move. So what if people think they have over-priced themselves, this is about more than just a number and a pound sign, this is about being a part of the most progressive brewery in the UK and following them with a more vested interest for now being involved. Love the beer, own part of the company, care a little more about what they do.
Posted by Mark Dredge