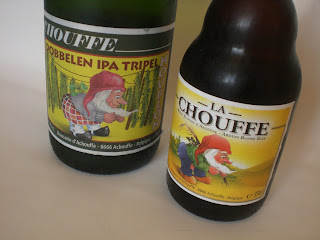 Those handsome be-gnomed bottles of La Chouffe had been sitting in the cupboard for a while, next to each other like a beer-warped cartoon version of Twins. The thing is, 750ml of 9% beer is quite a lot, so I wanted to share it. Sharing is good. Plus I wanted to compare the two side-by-side and have them with friends and food. The good news is that I’ve finally done it and the result was such a roaring success that it gets the illustrious FABPOW! status.

Beer first - La Chouffe and Chouffe Houblon. Both 9%, the difference being that the Houblon is a Double IPA Tripel, meaning, essentially, that it’s got a lot of American hops in it. I expected them to be the same base beer with one hopped-up, but judging by the colour difference this isn’t the case – the Houblin is much lighter. La Chouffe is a caramel colour with a spicy-bready aroma and a prickly mouthfeel with softens and sweetens as it relaxes in the glass. Houblon is all that plus a wonderful, smooth citrusy-floral hop flavour that’s so drinkable; not overpowering, not tongue-splitting, not aggressive, just really delicious. The Houblon was quite a few months old so the hops had mellowed, I’m sure, but they were still in there, teasing and tantalising.

And then the food. I roasted a chicken covered in sweet and smoked paprika. It was stuffed with garlic, lemon, thyme and rosemary. This sat on top of loads of onions, garlic and herbs and some potatoes, all seasoned and paprika-ed. I had this with roasted tomatoes, onion, basil, thyme, garlic and olives mixed into cous cous with some of the chicken juices. There were also some cursory green beans with garlic and lemon. It was a great dinner. Served with the beer, it was even better.

The beer and food together was just effortless perfection. The spice and hop combo in the Houblon lifted the smoky-earthiness in the chicken and sweetened it while the soft carbonation played little tricks with the richness of the dish. It probably shouldn’t work given that the food is quasi-Mediterranean and North African while the beer is Belgian with an American punch, but some pairings just work so unequivocally and so simply and this is one of them. That roast chicken might now become my dinner party staple, in which case I need to find a few more bottles of the Houblon.

This is the first FABPOW! for a while, so has anyone had any decent food and beer pairings recently? FYI, dessert that night was crème brulee with a Bourbon County Stout – it was almost great but the beer just overpowered it.
Posted by Mark Dredge