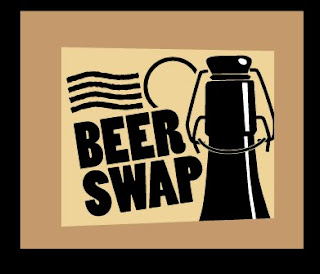 Awesome take up so far, reaching out to more than just beer bloggers and into brewers and pubs and non-blogging drinkers. This is good. Beer Swap is out there and I’m sure we can snare a few more in this week… Before we finalise the deal, here’s some more things to sort out between us.

1. The number of bottles? I’m going to say let’s do four. It’s probably better to go for a moderate number for a few reasons: cheaper postage, cheaper to buy the beers, quicker to drink them, shorter blog posts.

2. The type of beer you send is totally up to you, but I’d say make it the best local stuff you can find. Don’t just send any old crap because they brew down the road, get the good stuff. And try and go for a bit of variety, so send beer from at least two breweries. And if you brew your own then feel free to put that in too.

3. How the hell do we select who sends to who? This is the tricky thing logistically. I think the sensible starting point is to create as North/South divide and draw between them. I also think it’d be better if it’s all interlinked, so you don’t just send and receive with the same beer brother. I think randomly drawing names works, so maybe Andy (or here) and I could do a live draw over twitter.

4. Finishing dates. You need to send, receive, drink and blog by is the 4th December (blog it any time in the week before) and then we can do a little round-up for the 6th December. I think this works…

Anyone with any more ideas then throw them in. Anyone who hasn’t said so yet and wants in, then let me or Andy at Beer Reviews know. I will post next week about the next step, which will be drawing the names and sorting out who sends to who. Until then, buy the beer and use the #beerswap hashtag in twitter so we can keep track of everything!!

And a huge thank you to Barm/Robsterowski for the logo – it totally rocks! I’ve got another idea which needs a logo so I might drop you an email… I can only pay in beer though!
Posted by Mark Dredge