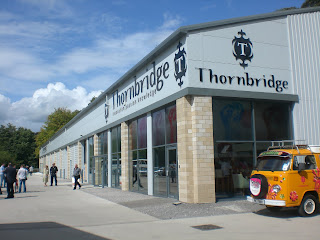 All I really wanted was a great pint of Jaipur, I thought to myself as I spent hours on a train staring out the window as the countryside blurred into a deeper green. It’d been ages since I last had Jaipur and I was missing it terribly. When I (or we – I ventured up with Brad who is resurrecting Ale Affinity) told people that I’d come up from Kent for the day they looked surprised. When I said I was going back tonight they were even more surprised. To me, the trip to see the new Thornbridge brewery was a no-brainer. 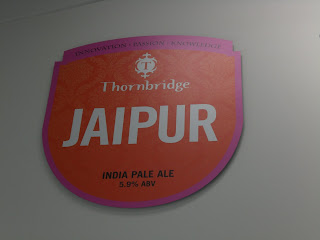 Having been to the old place beside the grand Thornbridge Hall I didn’t know what to expect from the new place other than a lot of silver (these videos hinted at the shiny future). What I found was a vastly impressive modern site, a cool bar space, newly branded bottles and pump clips, a phenomenal brewing space, a groovy Volkswagen and most importantly, more Jaipur than I could possibly drink. 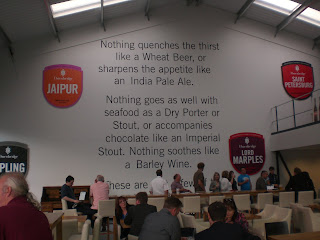 The bar area is glass-fronted, large and bright with huge pump clips on the wall around a quote from Michael Jackson (as I’m moving into a new flat soon this gave me plenty of good ideas, now I just need to convince Lauren that painting cool quotes on the wall is good and I need to convince Thornbridge to send me a giant logo). This is where I got my first Jaipur and it was everything I remember it being: fruity, full-bodied, hoppy, rich yet still delicate and so fresh. Wonderful. 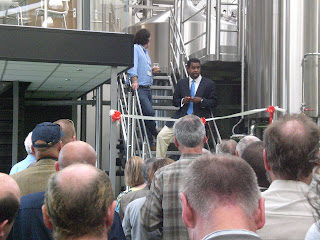 First sight of the actual brew house came when Garrett Oliver opened her up. Now, I haven’t been to all that many breweries but this is nothing like anything I’ve seen before. I expected giant silver bullet-like tanks and I got them and more. I expected technology and I got that and more. I expected to be impressed and I got that and more. I want to be able to write about the brewing stuff but won’t through fear of getting it completely wrong (I’d just finished my third beer by the time the tour with Kelly started). Zak had his notebook out and so I thought I’d better do the same (following the lead of the Beer Writer of the Year, of course) but I only ended up writing seven words and one of those I got wrong and had to correct later. Instead, I’ll put some pictures up and hopefully that’ll show what it’s like. 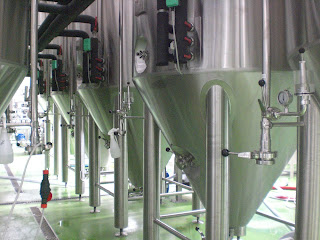 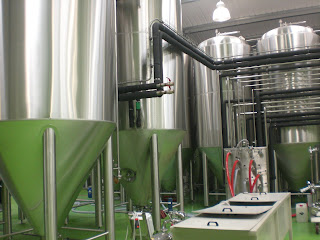 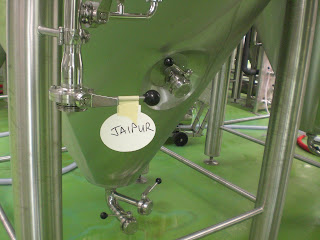 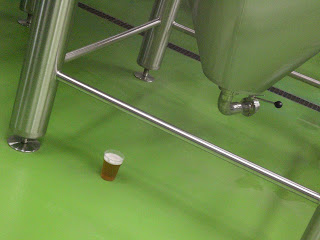 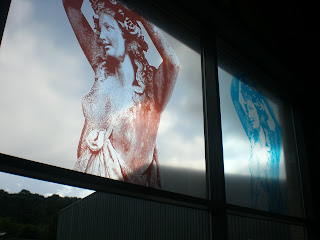 As a drinker foremost, the important piece of information is this: they will be able to brew over 10-times the volume of beer. There have only been 12 brews at the new place so far (’12 brews in so far’ were five of the seven words I wrote down) and I get the impression that minor tweaks are being made to make it perfect, but we tasted the first batch brewed and Jaipur tastes like Jaipur and that makes me smile.

The new site couldn’t be more different than the old place but the personal touch isn’t lost in its size or in how the computer software remotely runs the place. The personal touch isn’t lost because of the people who are making the beer. And that’s what it always comes down to and that’s why I write about beer: it’s all about the people. It’s them who make a place what it is, whether it’s a small outbuilding or a super-modern plant. I met them at The Rake, I drank their beer at The Bull, I went to brew with them for the day, now the new Riverside brewery and every time they impress me more. To paraphrase and add my own spin, Garrett Oliver deconstructed the brewery in his opening speech, and this works just right: Thornbridge successfully combines British tradition, Italian style, the audaciousness of the US craft brewing scene and a Kiwi spirit of fun and adventure. It’s Innovation, Passion and Knowledge and now a lot more beer.

Some notes on the pictures: Notice the bald/grey heads in the shot of Jim and Garrett Oliver. The giant Jaipur is the new pumpclip. That busty lady is part of the new branding for the bottles. The VW is cool. The silver things make beer.
Posted by Mark Dredge