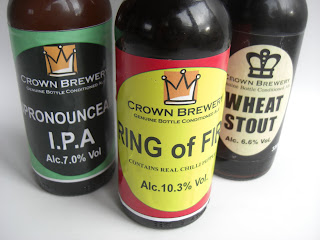 As with a lot of things nowadays, it started on twitter. Andy from Beer Blog posted that he was drinking a 10.3% chilli beer from Crown Brewery, Sheffield. Having met Stu, the brewer from Crown Brewery, at GBBF, I asked nicely and he agreed to bring me a few bottles when we were both at the opening of the new Thornbridge Brewery. Social networking at its very best.

I started off with the Unpronounceable IPA. It’s a punchy 7% and pours a royal crown gold with a fluffy white head. It’s hopped with 5kg of Bramling Cross (5kg in a 4 brl plant) and they come 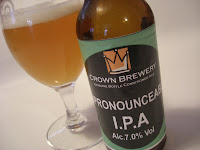 straight out in a plume of earthy blackberries – it’s got a great nose, really fruity and juicy and reminiscent of picking berries from the bushes with pink-stained fingers. There’s a great kick of bitterness to begin and then it gives way to more fruity berries and hints of apple sucky sweets. It’s easy drinking, full flavoured and really very good, plus it’s a nice adversary to the super-hopped US-style IPAs that I’ve been gulping back recently. Nice one. 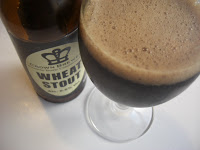 nose had me doing somersaults trying to work out exactly what I was getting and I never quite got to the bottom of it. What I did get was roasty and dark, chocolatey, spicy like wheat beer and slightly creamy. All of these come through in the taste department too, with more spice and coffee and a dry berry fruit bitterness in there as well. There’s also a sweetness which reminded me of oyster stout. Really interesting and enjoyable.

I saved Ring of Fire to last and I don’t mind admitting that I was pretty scared about opening this thing. My previous experience in this field is Crazy Ed’s Chili Beer which is just about the worst thing I’ve ever tasted (on a side note, my mate loves super spicy food so we made him strawpedo a bottle of Crazy Ed’s one day, he’s never been the same since…). So it was with some trepidation that I popped the 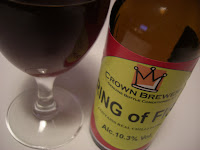 cap of this 10.3% beast brewed with fresh peppers and poured out a headless deep and dangerous chilli con carne brown beer with fiery red edges. I dipped my nose in and tentatively sniffed, fearing an olfactory burn but you know what, it smelled bloody lovely – dried fruits and stone fruits like a barley wine and then right at the end, like a cheeky little surprise, comes the fresh and slightly warming aroma of chilli (you know the one you get when chopping them, an earthy aroma, a little fruity, like fresh green peppers). But what about the taste… I was still worried at this point, not wanting to scold my lips, but there was none of that at all, no vicious burn, no hellish flames and instead it has that barley wine taste of a sweet, full bodied and richly fruity brew and then right at the end the chillis come in like a garnish of fresh green peppers – it tingles but it doesn’t burn and this warming tingle is really fascinating as it builds throughout. This beer seriously surprised and impressed me, in fact all of the beers did.

It started with a tweet and me asking for a few bottles of beer. Now I think there could be some pretty cool adventures to be had with twitter, think Yes Man with Tweets or Six-Degrees of Separation. “Come to Sheffield and stay at The Hillsborough”, Stu said to me on the way to Thornbridge, “they’ve got eight handpumps.” I might just take him up on that one day, although it might take a tweet to persuade me.

Some notes: Andy at Beer Blog (and Chilli Up North) has also written about Ring of Fire and Unpronounceable IPA. Stu has a blog here. Follow us all on twitter, you never know what you might happen. I couldn’t decide on which title to go for so I went with both. And I did listen to Johnny Cash's Ring of Fire while drinking the beer, it felt right.
Posted by Mark Dredge