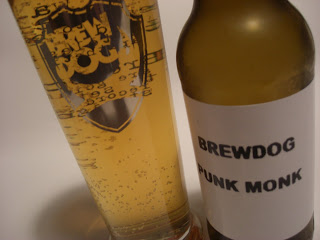 7.49pm: It looks like Punk, that familiar gold. And it smells like Punk too, fruity with lycees and strawberries and caramel, but then beneath that there’s a little something extra, something cheeky and naughty, a little estery sweetness, banana, pineapple and passion fruit. It smells goooood.

7.50pm: And it tastes goooood too. Yup, I like this. It’s Punk, it’s still fruity and bitter but it has that cool Belgian twist at the end. What’s strange is that it’s very similar to the standard Punk – and I drink a lot of it, in fact I can’t remember a time in the last nine months when Punk hasn’t been in the fridge – but it just goes a little sideways, kind of like kissing your other half and they throw in a nibble of the bottom lip to surprise you.

7.52pm: Talking of surprises, has anyone noticed that BrewDog’s Punk recipe has changed? The original hop line-up was Chinook, Crystal and Motoeka but now it uses Chinook, Ahtanum and Nelson Sauvin. I don’t think I’ve noticed a change in taste so it’s been a smooth transition, I guess.

7.56pm: There isn’t an ABV listed on the label, so I guess it’s 6% still, although it doesn’t taste it… And while we’re on ABV, have you read about BrewDog’s newest beer, Nanny State? Their ‘response’ to the Tokyo* hysteria is to brew a 1.1%ABV beer (savvy and inevitable, really). I like this idea a lot, at least I did until I read that it has a projected IBU of 225, using 60kg of hops in a 20hl brew. To me this sounds mental. How to Disappear Completely is a brilliantly brutal beer but it’s really at the limit of drinkability for me, and it’s made drinkable by the astonishing body that the beer has. A 1.1% beer with that many hops is surely going to be like drinking over-stewed, killer hop tea? I appreciate how they are sticking to their esoteric guns and playing up to the braying crowd, but if BrewDog were to have brewed a 2% beer, pale and a little hoppy (a baby version of Punk, say), then I would’ve stood up and applauded and been first in line to drink a few pints of what could be an important step in low-ABV British brewing. Instead I’m left a little uncomfortable with the fact that this is going to be an all-out attack (on ‘the man’ and on the palate) using their full arsenal of hop grenades. Still, I shall wait until I try the beer…

8.04pm: Back to this fantabulous Punk Monk. I really am enjoying it. The bottle compares favourably with the cask stuff I drank in The Bull (now officially the best pub in Kent!) a few weeks ago, and if I ever see it on cask again then I will dive straight for it. Now I’m just waiting for a Wild Punk seeded with wild yeast and a Baby Punk (see previous comment).

8.08.pm: The beer is going down like a voracious fluffer and I want more. I have another bottle but it isn’t chilled. There’s something about the Belgian yeast and the fruity hops which makes for a really great beer, all gooseberries and pineapple and berries. In fact, I’m tempted to open a normal Punk now to compare…

8.12pm: I couldn’t resist: a bottle of Punk is now in front of me. A side-by-side was the only logical way of doing this, I guess. The Punk has a little less fruitiness in the aroma, but the lycee, strawberry, passion fruit and caramel are still there. Tasting it I can pick out the similarities but the differences are there too: more biscuity malt and a more potently dry bitter finish in the Punk compared to the Monk, and a greater range of flavour in the Monk, different fruits, more depth. Punk IPA is such a familiar taste to me that I could recognise it in seconds yet I’m drawn towards the Monk right now and I want more of it. I really do.

8.17pm: Right, that’ll do. I’m off to finish this Punk Off and read some blogs and talk some shit on twitter. If, and when, Punk Monk is for sale on the BrewDog website then I urge you to buy it. It’s really very good.