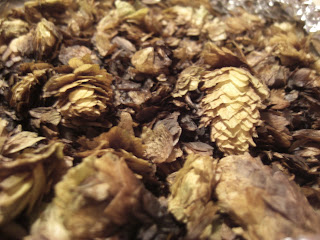 I knew that hops were related to cannabis. This was just something I picked up on the way. I only realised quite how similar they were when I decided to smoke a few.

I was inspired by two sources, one was Stefan Gates’ Biscuit Tin Smoked Salmon from Gastronaut and the other was a post on the Thornbridge Brewers’ blog. The idea was simple: cook fish in the smoke of some fresh hops. Just like wood smoking with a twist. I got the hops from Pete, who got them from Hopdaemon Brewery. They were Cascades. I bought myself a fat piece of cod. I engineered myself a makeshift smoker. I was ready to go.

Stefan Gates uses an old biscuit/sweet tin and wire. I neither had an old sweet tin or wire so I grabbed a wok, lots of tin foil and the wire rack from the grill. Makeshift, like I said. I made a nest out of tin foil for the hops so they couldn’t escape, filling it with as many as I could. I placed this inside a huge wok and put the wire rack on top. For a lid I used more tin foil. Then I just lit the hob and let it heat up, placing the fish on the rack and covering to smoke for about 10 minutes. It’s easy. 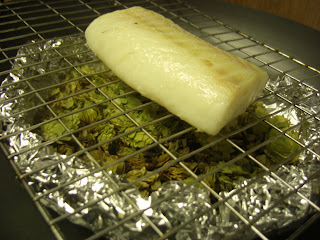 The Cascade hops in their pre-smoked state were wonderfully earthy, spicy and fragrant with citrus, which I hoped this would come through into the fish. As the hops stated to warm up all the citrus aromas came out, this then turned into sweet tobacco, then to a massively worrying cannabis-perfumed cloud (‘Honestly officer, I’m just making my dinner’). This fug was when I was acutely aware of the relationship between hops and cannabis, but this soon developed into the relaxing smell of bonfires and burning, fresh wood.

Ten-minutes, and a kitchen full of smoke, later and it was done. But the taste? It’s really unique, interesting and powerful, unlike any other smoke flavour I’ve had before. Beyond the sweet fish it had the taste of a smell: bonfire smoke on a cold evening, plus faint hints of earthiness and even a little dry, herby, burnt citrus. I had mine with spicy noodles and a bottle of Jaipur which was fabulous with the fish - just sweet enough to soften any harsh edges. 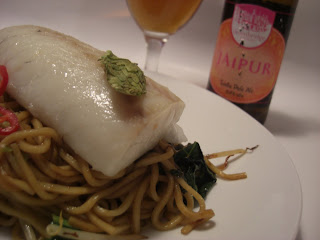 It was an interesting experiment, that’s for sure, and something I want to try again. I was left worrying about possible after-effects of smoke inhalation which was perpetuated by a self-fulfilling paranoia (Am I going to get paranoid? I think I’m paranoid… Why aren't I paranoid?) and the fact that I couldn’t find anything about hop smoking online. There was some moderate panic that I may have also gassed myself and that I'd pass out any minute. All was well in the end though, I'm happy to report.
Some words of warning: I got into a lot of trouble for doing this. The house reeked of sticky, thick, sordid smoke for days. Pretty much everything had to be cleaned, including the actual fan extractor above the hob. But don’t let this put you off, just learn from my mistakes. Firstly, keep it covered so that the smoke doesn’t escape. Secondly, keep it covered so the smoke doesn’t escape! It’s the smoke which smells. It’ll be cooked in 10 minutes but leave it for longer if that worries you, just keep it covered. If you can use a sweet tin then I’m sure the smell wouldn’t be so bad, or it will at least be contained in its own little space. Alternatively, cook it on the barbeque.
Posted by Mark Dredge