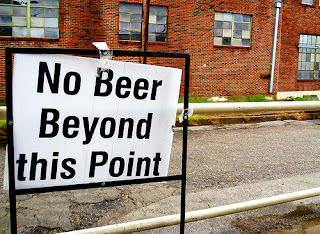 For months my mates and I have been meaning to do a bar crawl around London which involved no beer. As we always go from bar to bar drinking beer after beer, it seemed like a fun idea to try something different and see what the city had when we weren’t chasing hops.

It didn’t start off entirely successfully. We met in The Ship, a Fuller’s pub in Borough. The front row was on cask: Chiswick, London Pride, Bengal Lancer, ESB and Black Cab. A concession was made that the first drink could be a beer. It was Friday night and everyone had come straight from work, so we were thirsty and only a beer could slake that thirst. Besides, it was still early...

We started proper on cocktails at The Hide on Bermondsey Street, a piece of London which feels lifted from the backstreets of Brooklyn. A cool place, a bar lined with spirits and a thick menu to choose from. Mine was an Old Fashioned in a chunky tumbler. Others sipped from martini glasses, something virtually impossible to drink from without looking like a twat or an extra from Sex and the City. All tasted great but at £8 a glass it’s not something I’m drinking all night.

Next was gin. We decided to walk across Tower Bridge and get the tube from there – we were going to Barbican. This took longer than expected and was probably a mistake: we were very thirsty. Getting to The Larder, aka (to us, at least) ‘The Gin Bar’, I drank a great G&T in about 12 seconds and my thirst only increased. “Where next?” Wine? Whisky?

We ended up at The Old Red Cow. It was only around the corner. They don’t just do beer, someone said. Only the third stop and all six of us ordered a beer. We needed a DRINK. Some chased it down with whisky but most just had a pint while we battled it out over Connect 4. We’d started over two hours earlier and only had about a small volume of liquid. This was not what we’re used to.

Next it was The Lexington. A wall of 50 bourbons plus good beer. We order the bourbon but Sierra Nevada Celebration was also on tap and no one can resist that, can they? Another bourbon followed while we play foosball, plus a few mint-infused bourbon shooters. The bourbon and the beer are both excellent. And it’s a cool venue.

Others went on to a sherry bar before last orders while I jumped on a tube for the last train home feeling somehow like I’d failed as I’d ultimately not managed to last a night of drinking around town without going to beer.

The night wasn’t what I expected. I had a classic cocktail, a London-made gin, fantastic American bourbon and all were excellent and I got to see a few different bars, but such small measures were so different from what I’m used to when drinking with mates. And while everything tasted great, it just didn’t do the job that a pint does of being something uniquely satisfying to drink in volume. That’s what makes us able to drink beer all night long; it’s low ABV, it’s thirst-quenching but also thirst-inducing, and there’s also a more social aspect around it – a pint lasts a while and it just feels more friendly, more 'let's sit and talk shit' than a shot of vodka.

Sitting at home or at dinner with a bottle of wine is fine, sipping it through an evening, but out in the pub or in bars was a different experience. Maybe it was just that I was with my beer drinking buddies but it just felt weird. And while I love a wide range of drinks, it’s the variety which makes it most interesting and I think we’ve all learnt our lesson and that when wandering around London drinking it’s probably best to focus on beer and choose the others as extras.