Time well spent in search of a story 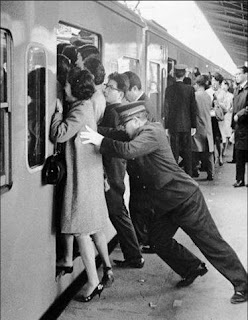 I travel three hours every day to get to and from work. Commuting sucks. Being surrounded by sleepy city workers who smell of coffee, perfume, mint and make-up (that’s on the way there; coming home it’s replaced with stale coffee breath, fast food lunches, cigarettes and sweat – the smell of hard work), who snooze through the stations until they get to theirs, who all read the same papers or look at the bright screen of an iPad or Kindle. There’s businessmen who furiously answer emails on their Blackberry, interns who tap and slide their finger over the Facebook app on their iPhones or those who just shut out the world and listen to music, probably dreaming of more sleep. When the National Rail ends and the Underground journey begins then the same thing happens just in a smaller space and with those not staring into a paper, book or Kindle staring at their shoes to avoid eye contact. The journeys are silent. Everyone too tired to talk yet, to disturb the sleepy silence, disturb the extra hour of rest we get before we work.

Despite this, the journeys are interesting. There's the occasional pretty girl, the guy dressed in an odd outfit or who sings aloud, someone reading a book you love or someone smiling as they read which makes me want to share the story, there's a familiar face, a quirky character, a rainbow of people, some dressed in pinstripe suits and others in the three stripes of a tracksuit. Who are these people? Where are they going? What job will they do at the other end? What will their day be like? How will we all combine to make sure the city keeps moving forward?

There’s also the reading time. Two hours a day set aside for reading is my idea of a well-planned day. The fact that it’s on an over-crowded carriage and costing me £400 a month is not ideal, but as long as I get that reading time then I don’t mind. I also don’t mind because I’ve just finished the best book I’ve ever read.

Carter Beats the Devil by Glen David Gold had me gasping, laughing, breathless and speechless. Most of the time I had no idea what was going on around me because I was so absorbed in the 560 pages in my hands and I could’ve ridden the train to its final destination and back just so I didn’t have to stop reading. The book is a magic trick from beginning to end and that final page turn, late a few nights ago, kept me awake with excitement. 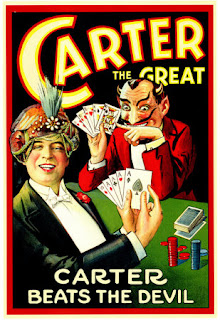 It was like the moment I sat in the plush velvet comfort of the cinema chair after the final frame of Inglourious Basterds snapped to black. I agreed with the final line: it was a masterpiece. Then I thought to 20 minutes earlier when I was open-eyed and open-mouthed as I stared in excitement as the on-screen cinema burned down. This is a film made to be watched here, I thought. An ode to how good cinema and storytelling can be. I wanted to watch it again, straight away, I wanted to be excited and moved, to feel the tension, to fall in love with the beautiful blondes, to be entertained and forget everything else around me.

I can now say the names of my favourite book and favourite film. Mr Brightside is my favourite song because it brings back so many memories and makes me want to jump around with no cares. The exciting thing is that I want to carry on reading, watching films and listening to music to have similar experiences, to be removed from the moment and absorbed in something; to be entertained, pleased, excited.

If I find that perfect beer then, like books or films, the search won’t stop because every beer has a different story that I want to know. And we make our own stories around them by where we drink them and who we’re with. The fact that we are characters in that story is the exciting part. The three hour commute is worthwhile when I’m transported to other places and times and emotions through the story. With beer the joy comes in the moment and the way we make that beer part of our story.
Posted by Mark Dredge