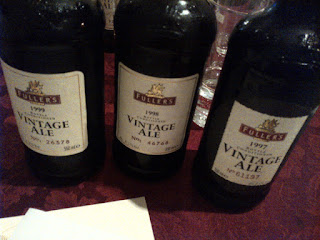 Every year I buy four or five bottles of Fuller’s Vintage Ale when it’s released. There’s one to drink fresh and the others to snuggle together at the back of the beer cupboard. I’ve got no plan for when I’m going to open them but going to the Fuller’s 15-year flight of Vintage Ales will probably push back the to-be-opened-on dates that aren’t-yet stuck to those claret boxes in my cupboard.

The recipe for Vintage Ale changes a bit each year – different hops, different malt – but they remain similar in colour, bitterness and ABV. I love about the Vintage Ales is how each one tastes different each time you try it; it makes them always interesting as sometimes they taste amazing while other times they seem reluctant to give away much, going through peaks and troughs. It also means from bottle to bottle things are different. Here’s how the bottles I had were tasting last week... 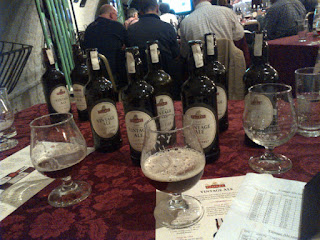 2009. Bitter orange, vanilla, almond. Brown sugar adds a sweet taste. Subtle carbonation is nice. Feels in a transition between new and old; it’s getting there.

2008. Blackberry, cherry and a fragrant spiciness which is like rooty, orangy turmeric and coriander. Really nice complexity to it (‘what is that flavour?’) which makes you go back for more.

2007.  Nothing jumps out the glass in aroma or flavour – it’s shy and not forthcoming. Seems to be asleep right now. Give it some time.

2006. Rich, crackery body which is going savoury. There’s a marmalade bitterness but it’s not very orangey. Like 2007, not much is going on at the moment. Try again later.

2005. Smells older suddenly. Sherried raisins and dried cherry. A definite sweetness which seems to lift everything. The finish remains dry. This is more like it – time is having its impact.

2004. Cherry brandy. The bitterness is more perceptible and the carbonation is lower. Not overwhelming in any flavour but it’s tasting excellent for its age.

2003. Two takes at this one as the first bottle was a little musty like second-hand shirts. Second bottle was like Christmas pudding – figs and brandy. Shows how different it can be from bottle to bottle.

2002. One of the best we had; one of the most interesting. Immediately it smells like fresh grain sacks. Then there’s some perfume which is backed up with a floral flavour. Cakey, fruity and still tasting so fresh – the perfumy hops are really pervasive. Complex and wonderful.

2001. Ribena and raspberry pips burst out the glass. This was probably my favourite of the flight with no signs of oxidation, a simple sweetness, a dry finish and that gorgeous fruitiness.

2000. Oaky aroma, some raspberries, vanilla and sponge cake – a little like arctic roll. So complex, so interesting. The last three bottles have all been stunning.

1999. Less aroma than the last two bottles but loads of flavour: full bodied, smooth sweetness, bitter tea, some sherry. Loads going on but restrained and interesting.

1998. You’d never know this was 14 years old as it’s aged so well. Complex but not challenging, smooth and clean but bitter and dry. Incredible depth of flavour to it.

1997. The original Vintage Ale. Lots of fruit still comes through and there’s little sign of oxidation. It’s rich and big and the bitterness lingers but it lacks the punch of those a little younger.

A flight of 15 Vintage Ales and all so different yet so clearly from the same family. Some of these have aged wonderfully, some less so. It’s hard to think that some could ever taste better while it’s exciting to think that others will definitely taste better soon (2006 and 2007 need to wake up). The best of these stood out as some of the best beers I’ve ever tasted; the fact that some were 10 years old is even more amazing. 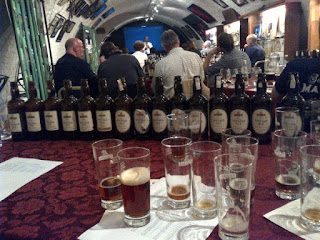 I love to taste how these beers develop and change over time and I’m fascinated by that process. Before the tasting Fuller’s showed us some numbers on how the beers went into bottle compared to how they are now. For me, the most interesting thing on these lists was how the bitterness changed: they all dropped by around 25% and this occurs within the first 12 months. But where does the bitterness go? It doesn’t just jump out of the bottle... The sugars also change with complex sugars turning into less complex sugars which causes flavour change. These simple, fermentable sugars then kick on further action in the bottle. 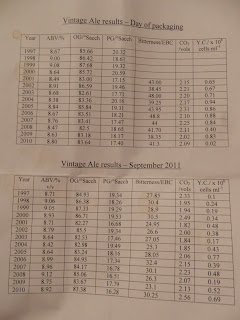 This tasting was the last time that all the Vintage Ales made will be opened together. If you’ve got any 1998 and 2002 stashed away somewhere then there are very few of these left anywhere, so you’ve got some seriously rare bottles. The best I tasted were from 2000, 2001 and 2002. They are perfect examples of how well beer can age. Now I just need to work out how long to let the ones I’ve collected last...
Posted by Mark Dredge