US Beer Trip, Anyone? 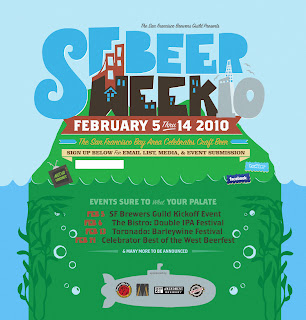 I’ve been working on a plan to go to the US for a couple of days now. I’m going to drink as much awesome beer as possible and I want to do it properly (plus it's my first beer trip Stateside). There are so many places I want to go but I have to limit myself this time. This is my current plan...

Fly to San Francisco for Saturday 13th February. I’ll catch the end of SF Beer Week. On the Saturday I’ll chill out, wander around, so to some bars, drink new beer and just get generally over-excited about where I am and what I’m doing. There’s a barley wine festival on but it’s not my favourite style and I wouldn’t want to spend an evening drinking it. On the 14th is the Celebrator Best of the West beer festival which ends the Beer Week, so I’ll be there. On the Monday I’ll mooch around, do the tourist things, drink a few more beers. Then I will go north, possibly Monday evening. This will give me two days to visit Russian River, Lagunitas, Bear Republic and wherever else. Then back to San Francisco airport and fly to Boston (I’ve found decent airfare for doing the trip as three single journeys – £525ish) on 18th for the Extreme Beer Festival (why not, eh?!) and some more drinking around in some bars (doing the West Coast and East Coast in one trip). Then fly home on Sunday 21st.

What do you think? Anyone done these before? What things should I be doing? What should I be drinking and where?

And, anyone fancy coming along for the trip?! Or part of it? I think there will be a few people in Boston when I’m there. I’m arranging to meet some people at different stages of the trip too. Hopefully there’ll be familiar faces and names at each stage, which will be very cool. I hope to book up the flights in the next few days. The rest I'll worry about after.