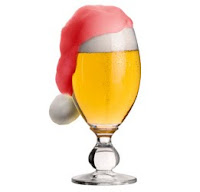 Merry Christmas everyone, lots of love and festive cheer and all that. May the next few days be spent with friends and family and be filled with good food, good drink, happiness and lots of presents.

I finish work at 12pm on Christmas Eve and intend to pretty much stay drunk from then until January 4th when I go back to work again. I’ve got some great beers ready to open and share and I can’t wait.

If you are stuck for presents then what about a share in BrewDog? It seems they need people to buy a few more... They want £2.3million from Equity for Punks but the deal was always that they needed to raise £500,000 in shares by January 8th 2010 for any of the investments to be valid. They’ve now revealed that they are still £175,000 short of that target. Essentially this means they have so far sold about 1400 shares and need to sell another 760 in the next two weeks or they have to hand back the £325,000 with their tail between their legs. I wasn’t going to mention it but then got a great email from a British brewer (not one from BrewDog!) and here’s part of what it said:

…Now, I don't know them, or want a job with them (it's fucking freezing in Scotland ALL YEAR ROUND) but as a young (!) brewer, I recognise their importance to craft brewing in this country. Let's not forget that Dickie was at Thornbridge when Jaipur and St Petersburg came out, giving the microbrewers a right kick up the arse at the time I was just starting my brewing career. What about Hardcore IPA, and its ability to hold its own against the big DIPAs of the US? And do you not get butterflies in your tummy when they release a new beer (and not just when it’s the strongest beer ever)?

Imagine craft beer for the masses (which a big new brewery will achieve), AND the Abstrakt range for us beer geeks!! I know the business investment side is flawed, and I know your thoughts on the whole thing. But dare you not dream? ...I'm desperately worried they won't do it, and I really, really want them to.

This investment is as much about buying into a mentality as it is a financial one. I think they spiked their own drink with the Tokyo* thing and that was a bad move, but they know that now. BrewDog are at the exciting forefront of current British brewing. Love or hate them they make people talk and more people know about beer because of them (and British craft beer is getting seen and heard further away). Luckily for them their beers stand up to all of this attention and taste great. They are young, they are determined, they are passionate and they are doing great things for beer in the UK. If you can afford it and you want to be a part of the future of quality beer in the UK, then go on, treat yourself to a Christmas present and buy a share in BrewDog. Wooly Dave has written a great piece on this too and Brewdog have posted a Call to Arms. I really want BrewDog to succeed in all of this.

In other news, I’ve now booked my flight to the US. I’m going to San Francisco on 4th February for Beer Week (flying back 11th). I’m not bothering with the Extreme Beer Festival now and will focus on SFBW, ripping IPAs and monster steaks. Brilliant. My trip also coincides perfectly with the release of Pliny the Younger and I’ll be at the Double IPA Fest where it debuts outside of the brewery bar. If anyone wants to come then get your flights and I’ll see you there! My next job is to make a list of all the places I need to go and all the beers I need to drink. Could take a while...

Before I go, there’s still time to give your votes for the Beer Awards of the Year and if anyone is interested in the Sheffield Tweet-Up on January 23rd 2010 then just say – everyone is welcome. Oh, and if you haven’t seen them then you really must watch the Elf’d Blogger videos (1 and 2) created by Tandleman – brilliant!

And the picture is from here.