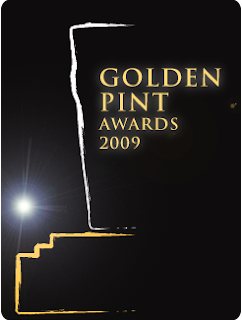 Personally, I’ve had a good 2009. I graduated from a Masters degree, I started a career, I moved in with my girlfriend, I wrote the first draft of a novel (and another 35,000 words of a second), I became an uncle and the BGBW award topped it all off. Beer-wise it's been a great year too. Lots of new beers tasted, new favourites found, new friends to drink them with and lots of great memories. But... it's time to announce my winners for 2009. It’s been really hard to select most of these, hence why I’ve gone for some honourable mention choices too. If you’ve been reading this blog for a while then most of the winners will be familiar names – I like to talk about the beers I enjoy the most. I did a semi-similar thing last year and my choices are quite different and I’m sure that this time next year they will be very different again.

Feel free to take these categories and the logo (designed, like Beer Swap, by Robsterowski from I Might Have a Glass of Beer – cheers!!) and paste them into your own blog, alternatively you can email me your winners and I’ll post them on here or you can comment yours below.

Best Overseas Draught Beer: Too many choices... Stone Imperial Russian Stout, Captain Lawrence Reserve, Bear Republic’s Racer 5, De Molen Amarillo... Ultimately, Racer 5 reminds me of a good couple of days in London and I won’t forget it in a hurry

Best Overseas Bottled Beer: Pliny the Elder (a few Mikkellers are up there)

Best UK Brewery: BrewDog for being constantly interesting, pushing and progressing British beer and making people talk about beer (Thornbridge, Marble and Gadds need mentioning and with all moving to bigger breweries it’ll be interesting to see how 2010 fares for them)

Pub/Bar of the Year: The Bull, Horton Kirby (The Rake is runner-up)

Beer Festival of the Year: GBBF (Planet Thanet is second – love that festival)

Supermarket of the Year: Sainsburys (Tesco almost got it for introducing Gonzo Imperial Porter, 77 and zeitgeist but they took away Orval in the process...)

Independent Retailer of the Year: Utobeer

Online Retailer of the Year: Beermerchants

Best Online Interactive Brewery: BrewDog (for their ability to go viral – no one else in UK brewing has that power)

Food and Beer Pairing of the Year: Anything with the pork scratching at GBBF!

Open Category: Best Beer-Related Thing about 2009 is...: All the new friends I’ve made and all the great new people I’ve met through beer (The Best Non-Beer-Related Thing...: Becoming an Uncle!)

Next Year I’d Most Like To... : Drink in the US and make some beer-money from writing...

Dubbel, Rabidbarfly and John Clarke have commented their winners here. Chunk, Knut and Andy have blogged theirs. And I think Kelly from Thornbridge needs a special mention for putting the year of blogging into a poem!