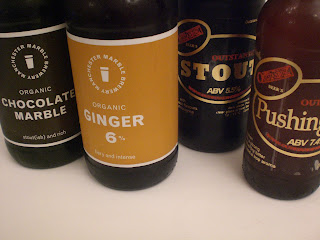 After all the organising, the blogging, the tweeting, the hoping things would work out, the collect+ problems, the broken bottles, re-sending those broken bottles, the chasing people up and pushing them along, and then more chasing... after all of that I finally got around to the best part of Beer Swap: getting my bottles and drinking them.

Darren from Blog O’Beer (and @blogobeer) sent beers to me from Manchester. When I returned from the collect+ store I was ridiculously excited about opening the package to see what I had been sent. And it was real excitement, a great sense of fun, just like Christmas. I was delighted with what I unwrapped: Marble Ginger, Chocolate Marble, Outstanding Stout and an Outstanding Pushing Out – four brand new beers to me from two very exciting breweries from the North West.

I started with the Ginger (the 6% version this is – there’s also a 4.5%). The label says this is ‘fiery and intense’ and it certainly pours a colour that deserves that description. The nose is dominated by ginger and that goes straight through to the taste – candy sugar then in to fresh, sweet ginger and peppery spice, fragrantly earthy with a dry, bitter finish. I had the 4.5% Ginger Marble at The 2 Kents Beer Festival and I’ve grown to love it after initially not enjoying it. I had this with belly pork and spicy butternut squash (just like this one I had with Ruination) and it was perfect – a FABPOW! waiting to happen. This is an impressively different bottled beer.

Next was Chocolate Marble (5.5%), a near-opaque red-black pour with a tan head. A full roasty nose, chocolate, caramel, a lactic sweetness. It’s a great drinking stout, dark chocolate, a roasty richness, more of that caramel sweetness and a long, earthy finish. A lovely bottled stout, easy drinking and uncomplicated. And this was followed by the Outstanding Stout (also 5.5%). I was interested in the comparison between these two and it was immediately clear as I poured the Outstanding – it’s darker and fuller-bodied, the aroma was chocolate again but with smoke and liquorice this time, less sweetness and no lactic quality. The taste marked them apart too with this being fruity and ever-so-slightly sharp (in a fresh berries kind of way), full bodied, lots of liquorice and sweet smoke, smooth and with a long, dry, earthy-bitter finish. This had big flavour throughout and was very good. I think bottled stouts are very hit and miss. There’s often a whole middle section of the beer missing and it tastes thin or watery. These both got it just right.

I finished the evening with Outstanding’s Pushing Out, a strong golden ale (7.4%). It pours a great looking amber red with a fluffy head but then things get interesting... A big nose which is immediately like pick n mix, fruity and sweet, but then beneath this it’s earthy and peppery, minty with the slightest hint of Orval to it (this added a great depth and a little tang which mirrored the fizzy sweets in a pack n mix, although I’m not sure if it’s meant to be there). The taste was more of the same – a bag of chewy sweets and then in to a great bitter finish, not too strong but still assertive, and there was a lingering nudge of sour (again, I thought this was better for it!)... I liked this beer a lot. It made me smile and that’s good.

Thanks again to Darren for sending the beers down. It was great to be able to drink new beers from breweries that I otherwise wouldn’t be able to get. I didn’t know about Outstanding before this but now I want to know more. As for Marble, well I’ve got a real soft spot for them, thanks to enjoying them at The Bull, and I think they are just great. Now I just need to venture up to Manchester to drink them where they come from.