Please, Sir, I Want Some Moor? 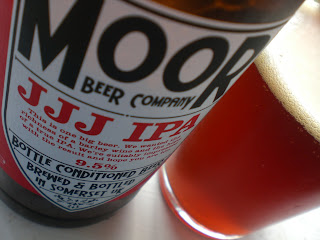 Moor Beer’s JJJ IPA is a beer that I’ve heard a lot about; it’s got one of those reputations that pushed it up high up my must-try list. It’s an elusive brew unless you live in Somerset (I don’t live in Somerset) and as UK beers go a 9.5% triple IPA (albeit brewed by an American) is a terribly rare thing. So when I heard that beermerchants were getting a pallet-load up from the West Country I rubbed my grubby little hands together in preparation of an order.

The beer finally arrived at mine last week after a voracious wait with nights of wild thirst (ooh, if you’ve read Oliver Twist you’ll now see that the title of this is not a totally tenuous allusion after all!). The first thing to know: everything about JJJ is BIG. This is not a pussy-footing, pretend imperial IPA. This beer is balls-out and in your face and it’s not scared of what it is; to be honest I think it revels in the fact that it’s harder than every other beer. The big bomber bottle is a good looking thing to start and who can resist a handsome looking beer? Out of the bottle it pours a deep copper red with a thick and creamy head. Sometimes you can look at a beer and know that it’s going to be something special; this beer looks like that. Dip your nose in but don’t expect it to be an olfactory hop-festival, no, that surprise is hidden away. You get the big malt, the toffee, some nuts and almonds, a boozy warmth as it grazes the nasal passage and a distant spicy whiff of those green grenades.

And then you drink.

For me the greatest joy of a beer like this is the mystery of it. There are moments during a gulp of beer when you don’t quite know where it is or where it’s going next and there’s a thrill to that see-sawing balance. JJJ’s body is huge and strong, creamy and smooth and mouth-filling. It’s huge caramel sweetness first and then comes one of those ‘moments’ where what happens next is a mystery. It’s a split second. It could go too sweet, it could flip-over and shrivel out or it could take off. This takes off. But it takes off slowly, gradually building up, wrapping itself around your tongue; bitter, floral, earthy, spicy and then more bitter and sweeter again with over-ripe tangerines, pine forests and roasted fruits and more bitterness, growing all the time, then the swallow leaves behind the dryness which grips tightly and hangs and pulls you up back for more sweetness; it’s that essential kiss-on-the-cheek, slap-on-the-bum of big malt and big hops that makes very bitter beers so drinkable (you get a malt kiss then you get the slap, but you want another kiss, but the kiss is attached to another slap, then the slap starts to get fun…). And it drinks so well too; I finished a bottle in no time and loved every sip. I had a Stone IPA before it which I chugged with dinner and the combination of that and JJJ left me with the stupefied, hop-stoned beer buzz. And I love that feeling; it’s just totally relaxed and chilled out and happy; it’s the ‘ahhh’ of finishing a beer followed by the calm afterburn. But don’t expect an IPA as you know it. It’s not one of those 9% American hop bombs; this is more of a super-hopped barley wine given the fullness of the body, the roasted caramel maltiness and the fruit. It’s really very good, you know, and there isn’t much like this being brewed in the UK right now either. 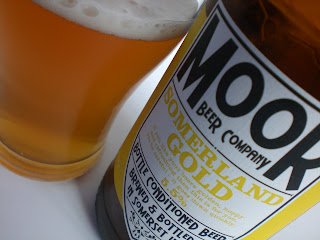 You can also get two other Moor beers from beermerchants: Somerland Gold and Old Freddy Walker. I’ve just finished a Somerland Gold (5.5%) now and I’m impressed again. Here’s the important stuff: it’s golden in colour, but you’d expect that given the name; the nose has a sweet, cakey creaminess to it topped off with citrus, tangy apricot skins and very distant pine; the taste is superb, a big mouthful of clean pale malt, smooth and crisp and sweet and then the tropical fruit bitterness rolls up and attaches itself to the insides of your mouth, clinging on for dear life as you swallow. It reminds me of Thornbridge’s Jaipur in many ways and it’s fantastically drinkable.

JJJ IPA is a triumph of a beer, Somerland Gold is a classic-in-waiting and beermerchants is the only place you can buy these bottles. You really should drink Moor beer.
Posted by Mark Dredge